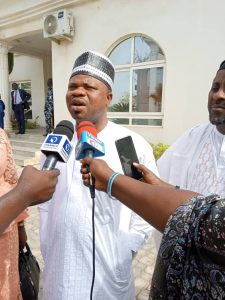 The need for traditional rulers in Nigeria to be accorded recognition by the 1999 Constitution (as amended) has been advocated by the National President of Nigeria Union of Journalists, NUJ, Comrade Chris Isiguzo.

Isiguzo made the call on Thursday, January 23, when he paid a courtesy call on the Galadima of Muri, Alhaji Tukur Aba-Tukur, at his palace in Jalingo, Taraba State.

He said there was the need to strengthen the traditional institution by not only ensuring constitutional roles for them, but also by ensuring proper funding for the royal fathers.

The NUJ National President explained that such recognition would enable the royal fathers to contribute more to the security of the nation.
His words, “I want to call on the relevant authorities to effect a constitutional amendment to give traditional rulers roles to help restore peace in their communities.

“There should also be increased funding for the royal fathers to enable them keep the rich cultural values and norms of the country’s diverse ethnic groups.”

Responding, the Galadima commended the NUJ National President for making such an important call.

Tukur, who appreciated the role played by journalists in nation building, urged the media to continue to push for good governance for a better country.

Our correspondent reports that the NUJ National President, who is in the state in continuation of his nation wide tour of NUJ state councils, was conferred with the chieftaincy title of Magatakardan (Chief Scribe) of Jalingo, and was decorated by the Galadima.