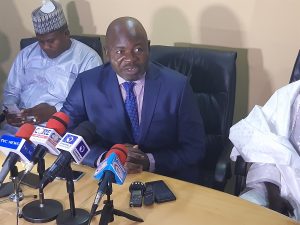 The Taraba State House of Assembly on yesterday passed the state’s 2020 Appropriation Bill estimate of N215.6 billion into law.
Recall that the state governor, Darius Ishaku, had on December 19, 2019 presented a budget estimate of N213.6 billion for 2020 fiscal year to the House for consideration and passage.
But the House, during its budget consideration jacked up the budget up by N2 billion, bringing the budget to N215.6bn.
Speaking to journalists after the passage, the Speaker, Rt. Hon. Joseph Albasu-Kunini, commended members of the House for the timely passage of the budget.
He said that N2 billion increase in the budget was based the new Value Added Tax, VAT, which had been raised from 5 to 7.5 percent, adding that the N2 billion was allocated to new ministries created by the state government after the budget estimate was presented to the House.
Albasu-Kunini also explained that the passage of the bill before the January 31st deadline was good for the development of the state, as it met the deadline of the World Bank for their services to Taraba State.
NationalCompassNg reports that the budget has over N71.5 billion representing 33.5 percent as recurrent expenditure and over N142.6 billion, representing 66.5 percent as capital expenditure.