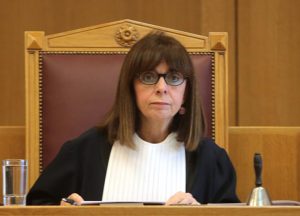 Greek lawmakers on Wednesday, January 22, elected Aikaterini Sakellaropoulou as the country’s next president of the republic after only a single round of voting.
While the role is largely ceremonial, this the first time a woman would be elected to the position.
Sakellaropoulou’s election signals Greece’s progression into a new era, Prime Minister Kyriakos Mitsotakis said after the vote, adding, “I’m happy we can agree on the big issues.”
The 63-year-old president of the council of state, Greece’s highest court, and also the first woman in that post, got 261 votes, more than the 200 needed in Greece’s 300-seat parliament to be elected after a first ballot.
Her nomination for the post by the Greek premier “honors both justice and the modern Greek woman,” Sakellaropoulou said after Mitsotakis announced his nominee last week.