Minister of Information and Culture, Alhaji Lai Mohammed, has urged investors to take advantage of the burgeoning opportunities in Nigeria’s creative industry, which he described as the fastest growing sector of the nation’s economy, in terms of business opportunities, employment, earnings and entertainment.

Alhaji Mohammed made the pitch at the 11th Tourism Investment and Business Forum for Africa, tagged ‘Investour’, which was held on the sidelines of the ongoing International Tourism Trade Fair, FITUR, in Madrid, Spain, on Thursday, January 23.

The minister disclosed that the sector currently employs about one million people, directly and indirectly, and has the potential to employ millions more, with the much-needed investment. 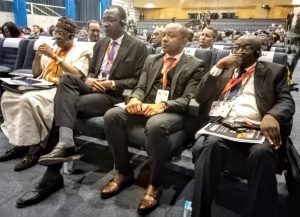 He added, “Nollywood, for example, is not just about entertainment. It is also a major driver of economic growth and job creation, especially for youths and women.
“With over 2,000 movies produced annually, the opportunities are immense for wealth and job creation.”

Contending that though the growth in the area of cinemas, for example, has been impressive, Mohammed added that it is yet a tip of the iceberg, adding, “In 2014, Nigeria had just 23 cinemas, 100 screens and three digital platforms.

The minister added that the potential impact of such growth includes the creation of additional one million jobs and a GDP growth contribution of 3 to 5 per cent.

Alhaji Mohammed, who served as a panellist at the event, said Nigeria also boasts of a very vibrant and popular music industry, which not only reflects her cultural richness, but has over the years translated into international recognition and acceptance.

He also noted that a chunk of the figure comes from digital music consumption, an area of the market which significantly boosted the industry in Nigeria and paved the way for local artists to thrive.

In the area of fashion, the minister put the earnings at over N4 trillion of Nigeria’s re-based GDP (National Bureau of Statistics, 2018), and described arts and crafts as another growing area of the creative industry.

He said that Nigeria could also leverage on gastronomy to grow her tourism and create jobs, with a rich food diversity, especially for women who, he said, dominate the sector.

He said, “It offers opportunities for communities to integrate tourism and local food systems in order to promote economic activities. Gastronomy tourism contributes positively to many levels of the tourism value chain, such as agriculture and local food manufacturing and provides a platform for the promotion of cultures through their cuisine.”