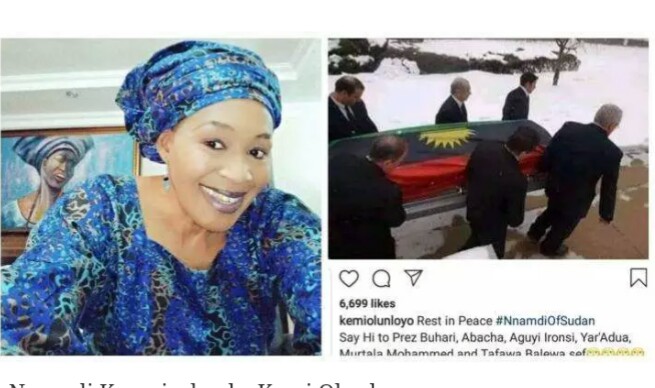 Self acclaimed medical journalist and controversial Nigerian blogger, Kemi Olunloyo, has restated that the leader of the Indigenous People of Biafra, IPOB, Nnamdi Kanu is dead.

Olunloyo, who had last week tweeted that Kanu died of the novel coronavirus in Italy, had come under attacks after the post; she however recanted about 24 hours later, saying that she could not confirm if the report she received on his demise was true. 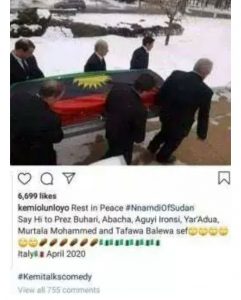 Ms Olunloyo, however, took to Twitter yesterday to state that the leader of the proscribed group has actually died in an Italian hospital, claiming that she received the report of Kanu’s death from a top military source.

She wrote in a series of tweets:

#BREAKING UPDATE: I was briefed by a top military defense dept source that Nnamdi Kanu did pass away in an Italian hospital as reported. I was also told that whoever is broadcasting is an impostor meant to keep IPOB together. The Italian Hospital source also confirmed it #RIPKanu

She claimed that anyone broadcasting in Kanu’s name is an impostor, doing a ‘voice over’ for the IPOB leader, adding that as a journalist, she could do same for any top government official.