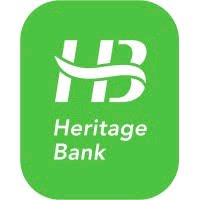 The fortunes of a financial institution, Heritage Bank Plc seems to be nose-diving and tumbling, the mistrust and loss of confidence by depositors and stakeholders, in the management, following the manner the affairs of the bank are being handled.

Against this background, CompassNG learnt that the bank is hit with panic withdrawals by its depositors, and thus fuelling speculations that the bank is moving down towards imminent oblivion, as natural death is staring the bank directly in the face.

Findings revealed that even the Economic and Financial Crime Commission, EFCC, has, severally swooped on the staff of the bank, apparently in respect of their failure to remit the Nigeria Port Authority, NPA, fund to the appropriate quarter.

With the development, observers, some of who are either stakeholders, depositors and other costumers have resorted to moving their money from the collapsing financial institution to other ones that are believed to be on secured ground, for fear of losing their personal heritage to the Heritage Bank.

A stakeholder, who pleaded anonymity confided in our reporter that “the hand writing on the wall of the bank has suggested imminent natural death.”

The customer added that “no wise man having anything to do with the bank will still remain there and that is why I have moved my money to where my mouth is, outside the Heritage Bank.”

Another depositor, who also doesn’t want his name in print said, “What is alarming in the case of the bank is that the efforts of the EFCC at sanitising the institution by arresting the erring staff, who are seen as being perpetrators of the evil deeds in the bank, are being shielded by some vested interests within the bank, who go about securing bail for the suspected errant culprits through the back door.

Right now, investigations have revealed that things have fallen apart and the centre has refused to hold in the bank, pitching the management, stakeholders, depositors and the staff against one another, in a war of mistrust that has started having its toll on the bank, thereby pushing it into an avoidable crash due to the widening gap.

A staff of the bank, who pleaded anonymity, also disclosed that the reason for the apprehension on the part of the stakeholders is not farfetched, explaining that “panic enveloped the halls of Heritage Bank on the heel of a clampdown on the bank by the EFCC over alleged shady dealings by Mike Danneil, the Principal Officer of the bank’s FINCON arm.”

According to him, it was rumoured that the EFCC swooped on the bank after it discovered that Mike had failed to remit monies belonging to the NPA into the federation account, suspecting that the development has reportedly led to a bad debt situation and has driven the bank towards bankruptcy, given its persistent failure to meet up with the financial obligations.

Checks also confirmed that, that is not the first time that Heritage Bank would be caught in the heat of a financial storm and alleged ethical impropriety, as it is on record that, its former Managing Director, MD, Ifie Sekibo, got locked up years back alongside Kolapo Daisi and other staff, over alleged issues of financial impropriety.

But they were reportedly let loose after receiving help from a serving member of House of Representatives, Hon Kabiru Tukura, representing a Sokoto State constituency, who was appointed, Chairman, House Committee on Judiciary.

He was believed to have been sponsored to the National Assembly by the bank MD.

Now, that Heritage Bank is in the eye of the storm again, it is being rumoured in some quarters that, the federal lawmaker has been contacted again to use his influence and contacts in the House of Representatives to ensure that Mike’s neck is saved from the hangman’s noose.

Investigation has also revealed that through that, the staff on EFCC’s radar, Mike, has been granted bail.

Consequent upon that, the bank’s major shareholders and depositors are believed to have started moving their money out of the bank’s coffers in a panic move to avoid losing their fortunes in the event of the bank’s eventual collapse.