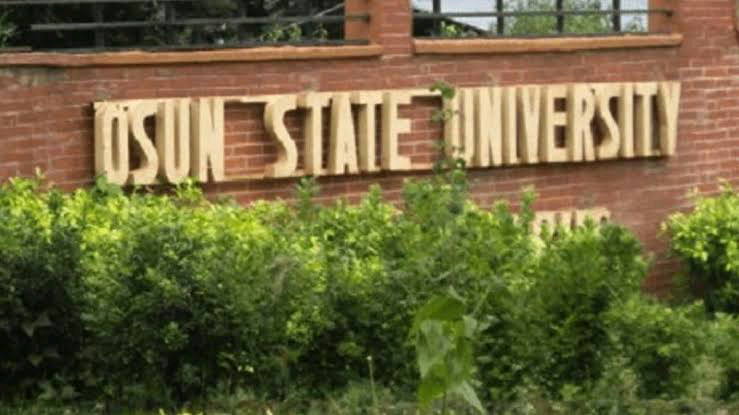 The Osun State chapter of the Nigerian Medical Association, NMA, has kicked against the perceived disenfranchisement of its members, who are lecturers in the Osun State University, UNIOSUN, from participating in the selection process of a new Vice Chancellor, VC to replace the outing VC, Prof, Labode Popoola.

Making it’s displeasure known at a press conference at the NMA House in Osogbo on Tuesday, August 17, the Osun NMA, in a statement signed by its Chairman, Secretary and Public Relations Officer, Drs Razaq Akindele, Emmanuel O. Folami and Oluwasina T. Salami, respectively, describe the recent advertisement in some national dailies, calling for application for the post of the VC of UNIOSUN from suitable applicants, but which by one of the strange requirements which excluded senior medical lecturers from applying, as “a deliberate attempt to disenfranchise the medical lecturers, who possess the postgraduate Fellowship, which is the highest academic and professional qualification of the medical profession.”

It said that it was using the opportunity to bring to the attention of the public and the owners of the university, the Osun State government “the ugly and dehumanizing issue occurring at the state apex educational institution, UNIOSUN,” and to express it’s “absolute displeasure on this issue.”

Recall that the VC, Prof Popoola advertised, requesting for application for the post of the VC in the ivory tower.

The advertisement specifically requested for only candidates with doctoral degree, interpreted to be the possession of PhD.

The Osun NMA said that this stand is completely unacceptable to it, insisting that anyone seeking admission to read medicine must be above average before being offered admission, especially against the background that the “cut off marks for marks for Medicine & Surgery and Dentistry, and some other professional courses like Law and Engineering, are the highest in almost all institutions offering the courses.”

It further stated that when admitted, “the rigor in going through the career is so enormous. Medical curriculum is not run on semester basis like other courses, but on continuous medical postings, of which you can only have one or two weeks break with each posting, sometimes after four to six months posting. No end of semester holiday like others.”

It also averred that doctors spend minimum of six years to qualify, after which a compulsory one-year housemanship follows.

It said, “You will agree with me that if such person runs a four year BSc programme, he would have completed his/her Masters’ degree before the doctor finishes his/her housemanship. The doctors’ residency program takes minimum of four to eight years to obtain the Fellowship, which is the highest academic and professional qualification to teach and practise medicine. A doctor in residency for six to eight years would have completed three PhD programmes if he does them serially. The PhD is at par with the first degree of medicine, MBBS. The National Postgraduate Medical College recently introduced the MD degree for medical trainees who may not be willing to complete the Fellowship programme – an option lower than the Fellowship degree academically. If a Medical Professor has undergone these rigorous of research, training, and service to get to this position, it is quite irritating to say such a person cannot lead the university community which he belongs.

“A Medical Professor can be the Head of Department, Dean, Provost, and Deputy Vice-Chancellor, but cannot become the Vice-Chancellor. What a paradox!

“College of Health Sciences is one of the very important Colleges in the University, and yet you say a Professor from such college cannot become the chief executive of the university, if he does not possess PhD.”

The Osun NMA also condemned in strong terms other conditions stated in the advertisement, which include: a demand of Researchgate score of 15.0 and 800 citations, describing them as obnoxious far-fetched.

It added, “None of the three Vice-Chancellors UNIOSUN has produced, including the incumbent, has these qualifications. The incumbent VC, Prof Popoola has an H-index of 11 on Google Scholar, instead of the advertised 15. He has 284 Researchegate Citations instead of the 800 advertised and 15.29 Researchgate score.”

“The same NUC guidelines determine that PhD certificate holders of all other disciplines be appointed as Lecturer II, similar to MBBS certificates holders. A fresh PhD holder will need three more years to attain the position of Lecture 1.

“By the NUC guidelines, the medical Fellowship is the minimum as well as the highest degree required to be a Clinical Lecturer. The Medical Fellowship awarded by the National Post-graduate Medical College of Nigeria, NPMCN, or its equivalent, is both an academic and professional doctorate degree.”

Citing UNIOSUN Establishment Law 2006, First Schedule, Officers of the University, No 3 (3), which states that “Subject to this paragraph, the Vice Chancellor shall hold office on the terms as may be specified in his instrument of appointment. The person to be appointed a VC must be a distinguished scholar with outstanding academic and administrative records. The person must possess a Doctorate degree and a professor of not less than ten years standing,” the doctors averred that “this is contrary to other universities establishment laws (federal and states) in the country, in that it failed to provide for the certificates (Fellowship), higher than or equivalent to Doctorate degree.

“This provision notwithstanding, and recognizing it as a flaw, the UNIOSUN Council in 2014 recommended amongst others for appointment as Vice-Chancellor, a distinguished Professor of Chemical Pathology with ONLY FELLOWSHIP DEGREE, and who was subsequently appointed the second substantive VC of UNIOSUN, Professor Okesina.”

It also added, “To avoid unrests within the university system, resulting from the requirement of PhD for the Vice Chancellor’s position of the University of Jos, it’s Council removed the possession of PhD from its requirements for the position of Vice-Chancellor, after the 2011 selection exercise which resulted in unrests and litigations. The exclusion of PhD (by the Council of the University of Jos) as a requirement for the VC position was recognized by law and used as a reason for the judicial pronouncement in the suit number FHC/J/CS/23/2011 of NMA Vs Unidos

“The University of Ibadan in its recent advert for the position of VC made being a scholar of international repute its main requirement, and did not include the possession of doctorate (PhD in particular).

“Where PhD is stated as a requirement (by other institutions) for the VC’s position, its equivalent is also included, in line with international best practice. An example is the University of Gambia, (a university that UNIOSUN is in-collaboration with), which has just put up an advertisement for the post of VC, the PhD or the equivalent degree was specified in line with international best practices.

The NMA said, “These men are/were scholars, who did not only conduct high-quality researches, but trained tens of scholars, who have gone ahead to train even more scholars. To say that a medical doctor who has reached the apex of his or her career through research and training is not qualified to become a professor or lead a university is to corrode the successes of these heroes past.

“To say that medical doctors need to have PhDs in a specialty before they can teach medical students is to say that Harvard University’s Dean of Medical Education, Professor Edward M. Hundert, needs a PhD; that Professor William Giannobile, the Dean of Harvard School of Dental Medicine needs a PhD; or that Professor Mark Emberton, Dean of the Faculty of Medical Sciences at the University College, London, requires a PhD.

Going forward, the Osun NMA made some recommendations to avoid the impending impasse over the appointment of a new VC for UNIOSUN and they include among others: an immediate withdrawal of the aforementioned
advertisement for the post of the VC of UNIOSUN; that a fresh advertisement be put forward, stating possession of PhD or it’s equivalent certificate, including Fellowship or alternatively, the possession of PhD be removed and replaced with scholar of international repute like University of Ibadan; that the fresh advertisment shall also exclude all external origin, bias and deliberate specifications that have no major bearing on the FUNCTIONS of the university Chief Executive as separate from only a researcher in the university, which is in line with international best practice and will prevent a DELIBERATE EXCLUSION of clinical lecturers with Fellowship degree ONLY and who are qualified, from the selection process for the position of the VC as in the current advertisement.

Other recommendations by the NMA include: that carrier progression of clinical lecturers should not be subject to attainment of PhD as clearly stated in NUC communication to universities as it is being handled at the bational level by the NPMCN, NUC and other relevant bodies; the current ongoing amendment to the 2006 UNIOSUN Establishment Law MUST CORRECT the exclusion and erring provision in 3 (3) and bring the law in line with global best practices; and that the University Council should be just and fair to all so as to engender peace within the university community to enable progress and growth.

The doctors averred that Osun State has witnessed harmony and stability in the health and education sectors under the present administration due to proactive and rational ways of conducting the affairs of these sectors by Governor
Gboyega Oyetola and his team, and that NMA in Osun has made several peaceful moves to abate any disharmony in any of these sectors, adding, “We sincerely appreciate the Honourable Speaker of the Osun State House of Assembly, Rt Honourable Timothy Owoeye, for his attention and actions.”

Osun NMA also berated the UNIOSUN Public Relations Officer, Mr Ademola Adesuji, for his recent press release on the issue, where he insisted that the qualification for the position of VC in UNIOSUN remains as advertised, and the statement that UNIOSUN is not LASU and LASU is not UNIOSUN; describing the statements as “ill-conceived, quite unfortunate, devoid of rational reasoning and quite embarrassing to the government and the good people of Osun State,” adding that Lagos State government saw reasons with the genuine agitations of Lagos NMA, MDCAN and others and withdrew the similar advertisement initially released by the Lagos State University and replaced with another one, which is all encompassing and does not discriminate against any sector of the academia.”

The doctors added, “Mr. Adesoji’s statement will heat up the system and disrupt the peace that this government seeks in all sectors of Osun State.

“We are appealing to the governor and Visitor to the Osun State University, His Excellency, Alhaji Ghoyega Oyetola, to look into the edict of the university with the aim of speedy executive amendment and approval to be all encompassing to the entire UNIOSUN academia. We believe in your willingness to do this, Sir, as always demonstrated when confronted with such issues.”

Reiterating their commitment to peace in the education and health sectors, and indeed other sectors of Osun State, the doctors said, “We pray the authorities of the Osun State University to review the situation with acceptable solutions.”