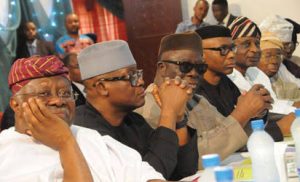 The pan-Yoruba socio-cultural group, Afenifere, yesterday declared that battle for Operation Amotekun has been won, adding that the next war is one for true federalism in the country.
This was contained in a communiqué issued at the end of its meeting held on Tuesday, January 28 at the Akure, Ondo State capital country home of its leader, Chief Reuben F. Fasoranti, and presented by Yinka Odumakin, the National Publicity Secretary of the group
After an exhaustive deliberations on the state of the nation, Afenifere expressed disgust at the inability of the Nigeria Police to find the killers of Funke Olakunrin, daughter of its leader almost seven months after her gruesome murder by unknown assailants.
More worrisome, according to the group, was the police’s stoppage of investigation into the gruesome murder without briefing the family of the deceased.
Afenifere said, “We are left with no option at this stage than to conclude that she was a victim of political assassination, necessitating state cover-up.
“We challenge the police to do its job on this matter in spite of our disappointment with them. We  also invoke her spirit to remain restless until the killers and masterminds of her death are exposed and brought before the temple of justice.”
Reviewing the recent struggle to assert the right of the South-West geopolitical zone to establish Operation Amotekun, a security network initiative of the South West governors, Afenifere concluded that it was “a battle won against the imperial Federal Government  by the strong will of the West and its freedom loving friends across Nigeria;” noting that “but for the depth of despair unitary rule has sunk Nigeria, states having security guards should not have been any issue as the 1999 constitution recognizes the right of state to protect lives and property,” adding that ‘state as espouced in the constitution “does not mean only the Federal Government, but states and  local governments.”
Observing that only “carpenters, maurading as lawyers would ever say that security is on any exclusive list,” Afenifere averred that there is no law that stops individuals from securing their premises, talk less of state actors.
The communique said, “The jejune argument by spokesmen of our tormentors that having a security outfit that cuts across states is unacceptable was seen as a non-sequitur, as Yoruba are a homogenous group once under a region which Nigeria broke into states.”
Afenifere therefore affirmed that Yoruba would find it hard to oppose Amotekun in any other part of Nigeria, if it owns Hisbah, Lafiya Dole and harbors Boko Haram and Miyetti Allah, that are tormenting the country and making President Trump considering placing Nigeria on travel ban.
While rejecting “any attempt to subsume Amotekun under the Community Policing scheme of the Federal Government which is just being informants to the Nigerian police, the pan-Yoruba group said that “Amotekun should be independent in carrying out the security of residents of South West with defined operational cooperation with the police, but not its subordinate.”
The communiqué added, “While Amotekun has now come to stay, there must be no let or hindrance in the pursuit of a federal Nigeria so that we can revert  to the multi-level policing status of Nigeria of the past, which saw the Nigerian Railway Corporation having it’s own police.
“In this regard, we are happy with the Senate President, Senator Ahmed Lawan’s declaration of support for issues in federalism, especially, multi-level policing and we enjoin the National Assembly to see it as the urgent business of now.”
While appreciating the aupport of its friends in Ohanaeze Nd’Igbo, PANDEF and the Middle Belt Forum, for standing aolidly behind the South West while the Amotekun controversy raged, Afenifere commended the South West governors for standing firm on Yoruba consensus on Amotemekun without blinking.
It said, “They showed they are proper born. We also recognise those individuals who spoke in clear language at the moment of crisis, such as Prof Wole Soyinka, Chief Afe Babalola (SAN), Alhaji Abubakar Atiku, Prof Itse Sagay (SAN), Mr Femi Falana, and others too numerous to mention.
“They shamed the agents of backwardness who opposed Amotekun and by extension the right of vulnerable groups in Nigeria to defend their lives.
The group also condemned in unambiguous terms the Inspector-General of Police-sponsored lawlessness in Oyo State over the dissolution of local government councils, following the call for self-help.
It said, “We are miffed that the Attorney-General of rhe Federation, AGF, is not appraised of the fact that Section 7 of the constitution which provides for the existence, administration and finance of local governments put them user states and not the Federal Government.
“Any pupil lawyer should know that you cannot enforce a judgement a state is not party to on it, as every case is an authority for what it decides. He is forcing a judgement Oyo State is not a party to on it.
“Besides, there are two cases in court on the Oyo local givernment  crisis that the AGF and IGP should have waited for their determination before instigating the lawlessness being precipitated in Oyo State.”
While commending the Oyo State government for the maturity with which it handled the matter, Afenifere “encouraged the state government to continue on that line until the court decides,” even as it called on the Federal Government to “bury its head in shame for being agent of destabilization once again.”
Afenifere also expreswed concern over the recent incessant fire incidents in some of the biggest markets in Yorubaland, among which are: the Akesan market in Oyo town; Bisi Onabanjo market in Ijebu-Ode; Amu market in Lagos! Sabo market in Sagamu; Bisi Egbeyemi market in Ado Ekiti Ekiti and Ojatuntun market in Ile -Ife.
It said, “While we are not coming to the conclusion yet that there is a deliberate sabotage on our economy, we call on our governors to investigate these incidents and increase security around our markets and business facilities.”