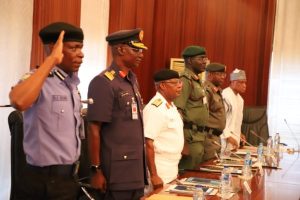 The dictionary described security as the state of being free from danger or threat. When the country is under threat, it relies on its security to provide security. National security therefore simply means the capacity or ability of a nation to mobilize military forces to guarantee the safety of the country from physical threats, including military aggression and attacks by non-state actors, like terrorism. But what would the country do, when its security is itself under threat?

Nigeria is not too far from the state where one can say the security of the country needs some security. With the establishment of “Amotekun” in the South West, and the threats of establishing “Amutukawai” in the North, the signs of loss of confidence on Nigeria’s security had never been bolder. Indeed President Muhammadu Buhari had shown strong will, both political and military, as well as the wherewithal, to fight the insecurity that has been bedeviling the country for close to two decades now. Since coming to power in 2015, the president had been genuinely fighting the insecurity, with improved results.

However, there seems to be a unity of reasoning, amongst all the sincere stakeholders that some of the methods in use, particularly in the fight against insurgency, need to be reviewed immediately. In fact, they ought to have been reviewed long ago. It was Albert Einstein that said, insanity is doing the same thing over and over again, and expecting different results.

As a General who has twice or thrice been the C-in-C of the country, and one that fought a civil war to success, the President should know better than most of us, that maintaining an effective armed forces calls for many strategies, including using diplomacy to rally allies and isolate threats. In today’s security architecture of Nigeria, some of the President’s sincere allies are outside, while amongst the insiders, there are people with many question marks, that pose more threat to the security of the security.

The President is surely aware of the fact that, marshalling the economic power to facilitate or compel cooperation is not enough. The machinery must be in place to assess performance, including set targets for results, which must reflect the yearnings of the people and the President. This is achievable only, if the President has close confidants and tested and trusted allies, especially in the area of intelligence gathering.

The present crop of service chiefs has surely done this country proud. They came at a time Nigeria needed them most, put in their best and recorded resounding victories against the enemy. But even though they have been doing their best, it’s pertinent for the President to know that they may not necessarily be the best. Like Einstein said, it would be reckless to assume the knowledge or strategy of a particular set of people, is the ultimate or only solution to a persistent problem. A cry in that line, seem to have come from the Senate President, Ahmed Lawan.

At a press conference on Monday, the Senate President said, the present security system is not yielding the desired outcome, as such, it should be restructured. Coming from the number three citizen, no one should take such pronouncement with a pinch of salt. Lawan said the escalation of killings and abductions are so serious that the senate is feeling compelled to seek for a definite position on Nigeria’s security architecture.

Though the Senate President may be talking with sectional sentiment, because his primary constituency, the North East zone has been the epicenter of attacks by Boko Haram insurgents, there seems to be a general deterioration in security in many parts of the country today.

PMB can proudly claim success for the sanity of Nigeria in many areas, because violence and various attacks have been curtailed, but we must not lose sight of the roles of our neighbors and the regional responsibly of the country, as the giant of the continent.

Indeed the country had recorded significant gains in reducing the rate of insurgent attacks, sequel to the border closure, because of the reduction of the influx of weapons through such borders, but the enemy might have devised a different strategy now, which may perhaps elude the strategic understanding of the present crop of service chiefs, and the capacity of those entrusted with intelligence.

Given the economic, cultural and demographic might of Nigeria, it would be expected that, the country would use its influence and power to contribute to the peace of the West African region in particular, and the entire African continent in general. This is where people with international contacts and trust, must be called to duty.

With the border closure, it is not only the fighting capacity of the enemy that needs to be reduced, but the stability and support base of the enemy must be crushed in a way that would not affect mutual respect and responsibilities. Only the seasoned hands with the needed maturity and experience can do this.

A proper strategy is likely to have impact on the peace, progress, and prosperity of the continent at large. Nigeria has historically helped in the de-escalation of conflicts in countries like Liberia, Sierra Leone and most recently in the Gambia. All those were achieved, by using different people with different ideas and maturity of minds.

PMB must therefore give these issues the seriousness they deserved, by ensuring that Nigeria moves away from this security position of “one step forward, two steps backward”. No individual can claim total monopoly of knowledge. If those behind, who are legitimately aspiring to get to the top, know that they cannot achieve that ambition, they may not necessarily work with the expected zeal or submit the best security strategy to the boss. That is even if the devil does not persuade them to undermine the leadership.

Changing the service chiefs is therefore not a sign of weakness or loss of confidence. It would be a morale booster to the junior ones, and additional confidence on the ability of the chiefs, to groom their successors.

Only last week, following the recent beheading of the chairman of the Christian Association of Nigeria in Michika Local Government Area of Adamawa state, Rev. Lawan Adini, CAN President Samson Ayokunle, called on the President to sack the heads of all the security agencies. Although the Presidency had reacted by alleging that CAN got it mixed up on the executed pastor, it would not be out of place if the President would give other officers the chance to try their best.

That way, the security would have more security and the country better secured.