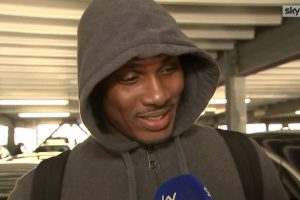 …Says He is Raring To Go
Manchester United’s new signing and Nigerian international, Odion Ighalo, arrived Manchester on Sunday afternoon and opened up on his transfer to the English Premiership side, describing the deal as a dream come true.
The Red Devils’ new loan signing jetted in from China as he prepares to join up with his team mates for his first training session on Monday, and there is every possibility he could feature in their next match against Chelsea.
Speaking after touching down in the UK on Sunday, Igalo said he is happy playing for a club he had adored  while growing up.
The former Watford striker flew into Manchester Airport on Sunday, after striking a loan deal till the end of the season at the close of the January transfer window. 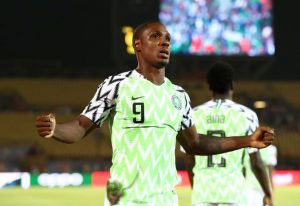 He is now preparing for his first training session with his boyhood club, and admitted that he was raring to go.
Ighalo said, “It’s been crazy, you know. I’m happy to be in Manchester first and this is a great opportunity for me.
“It’s a dream come true, because since I was a kid, I’ve always dreamed about Man United. But this is reality now, so I can’t say much until I get started.”
Exuding confidence to perform and his reading to hit the ground running, he added, “I am happy to be here and to work out with the team and finish very well this season.
“The plan is to just chill today, because I travelled a very long way from Shanghai to Manchester.
“Today is to just rest and tomorrow we start to work.”