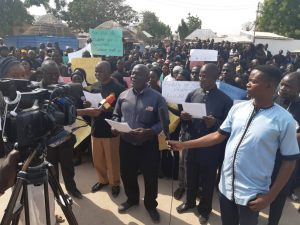 Christians in Taraba State, under the aegies of the Christian Association if Nigeria, CAN, on Sunday protested the incessant killings, kidnapping and banditry in the country.

The protesters led by the Taraba State CAN Chairman, Rev. Isaiah Magaji Jirapye, called on President Muhammadu Buhari to ensure the securirty of the life of all Nigerians by ending Boko Haram and banditry in the country. 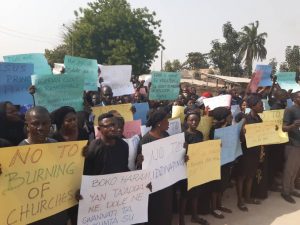 While urging the Federal Government to send all herdsmen brought to Nigeria from other African countries back to where they came from, Jirapye added that the herdsmen were constituting security threats to our country.

He said, “Every life lost in Nigeria is a slap on the face of the government and President Buhari should stop these killings which have worsen under his watch. 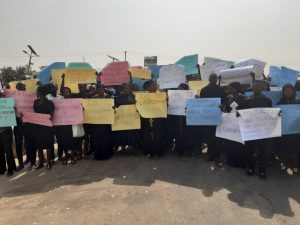 “Government should root out all bandits and kidnappers out of our land. Enough is enough, we can not take it any more.

“We want the President to end the killings. It is no longer news that most people being killed by Boko Haram and who are suffering more in the spiraling insecurity are Christians.

“We must all be treated equal. We want a stop to these killings. Any government which cannot secure lives and property, that government has failed.”

Rev. Iliya Audu, Kofai CAN Coordinator decried the gruesome killing of Christians, burning of churches and selective kidnapping of Christians in the country; even as he urged Christians to return to God, who alone holds tomorrow and who alone has a final say in the affairs of man.