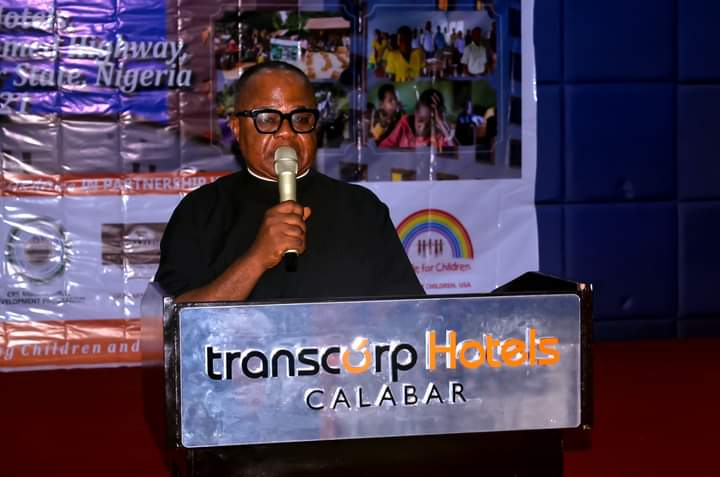 No fewer than 1,000 thousand migrants, refugees and internally displaced persons, IDPS, yesterday completed training on agribusiness and educational opportunities by a non-for-profit organization, Children of Rural Africa, CORAfrica-Nigeria, in Calabar, the capital of Cross River State.

Founder of the organization, Rev. Dr. Peter Obele Abue, in his welcome remarks stated that building capacity of the refugees and the IDPs would go a long way to assist them become self reliant, kick the shackles and doldrums of poverty out from their lives.

In his speech, delivered at the workshop, which took place at Transcorp Hotel, Calabar yesterday, Obele pointed out that the world is passing through a historical moment, marked with alarming frustrations, occasioned by wars, terrorism, kidnapping, insecurity and several other social vices.

Canvassing for care and assistance for the privileged, the cleric warned on the dangers that await the society should privileged people chose to neglect those who are vulnerable, stressing that the training given to the refugees would help to ameliorate the plights of refugees, IDPS and migrants.

The founder of CORAfrica-Nigeria averred that the training in agribusiness and education opportunities became necessary so as to provide opportunity for the beneficiaries to build their capacity on how to fend for themselves, given the gory conditions under which they find themselves due to migration and their subsequent settlement issues in Ogoja Local Government Area of Cross River State.

Rev Dr. Obele said, “We, the indigenes and host of these visitors, have noticed with dismay the gory conditions the families and children of these refugees are living in despite the great efforts of UNHCR and their willing partners.

“Nevertheless, it is obvious that these efforts need to be complemented.”

Also speaking, the National Programme Director, of the NGO, Dr. Jimoh Odunayo, who gave reasons for the essence of the workshop stressed that the training would mitigate the effect of COVID-19 pandemic that took negative toll on the economic wellbeing of many, not even sparing the refugees, IDPs, women and children in Africa and the world at large.

Keynote speaker and one-time Deputy Vice Chancellor, DVC, Federal University of Agriculture Abeokuta, FUNAAB, Prof Lateef Sanni, who is the Project Manager, phase two Cassava Seed System Project at the IITA, Ibadan, urged participants not to underate the refugees, as some may be sound with creative minds that if engaged in some ventures may bring about value addition to the economy of the nation.

The academic don charged those in places of authority not to relegate the refugees and migrants completely, but instead, they should seek for the area of strength of the refugees and ensure that opportunity is given to the refugees to function for value addition to the nation’s economy.

The Professor of Food Science and Technology advocated for improvements in specific areas of agriculture that the refugees can key into to boost their prospects in agri-businesses, stressing that the areas of strength of the IDPs and the migrants can be harnessed for the benefit of their host communities.

In his address, the Director General of the Cross River State Migration Control Agency stressed the need for the adoption of vocational skills to help boost the economic prospects of the people.

Earlier, wife of the governor of Cross River State, who doubles as the Special Guest of Honour, Dr. Mrs. Linda Ayade, who was represented by Secretary to the State Government, SSG, Barr. Tina Banku Agbor, said that the world was experiencing it’s biggest refugee crises since the Second World War due to the staggering 22 million people who had been forceful displaced by war and persecutions.

Ayade’s wife, who drew inferences from the neighbouring crises that sent many out from their country to find solace in Nigeria, maintained that apart from being a humanitarian and legal obligation, welcoming refugees taps to the resourcefulness of some of them who are very creative.

The governor’s wife commended CORAfrica-Nigeria for holding the capacity building workshop, promising to work together with other stakeholders for the good of the refugees and IDPs.