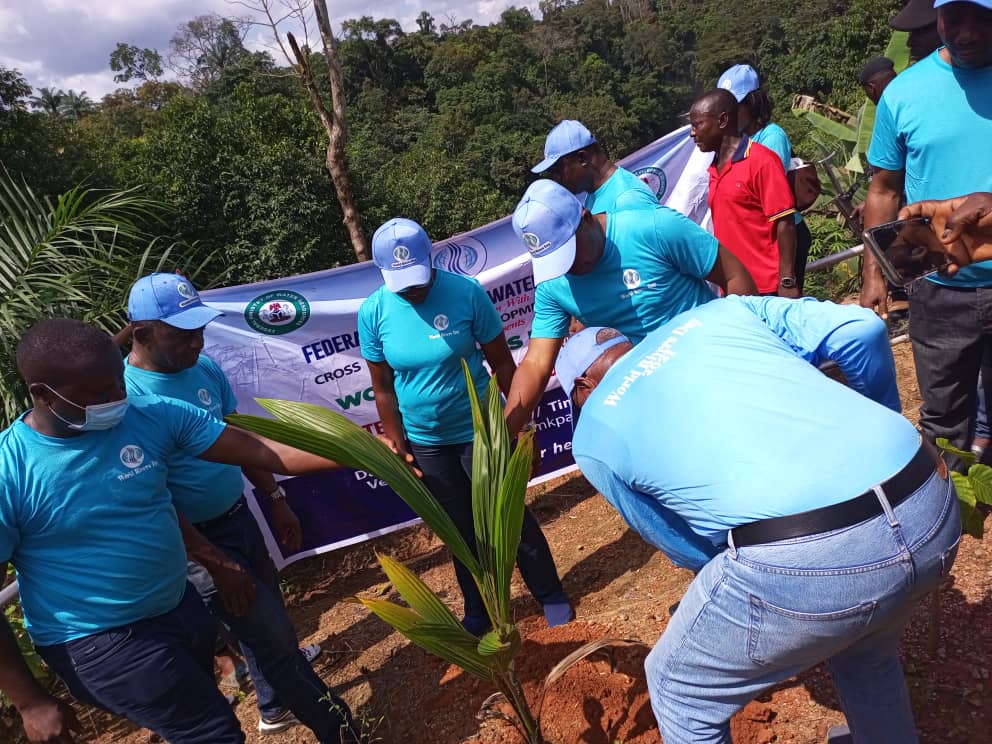 As the world marks Rivers’ Day, the Cross River Basin Development Authority, CRBDA, yesterday joined the rest of the world to celebrate the maiden edition of the World Rivers’ Day.

Addressing staff of the agency before newsmen at the tourists attraction site in Kwa Falls River, Aningeje community, Akamkpa Local Governmwnt Area of Cross River State, after a sensitization rally/tree planting exercise in Calabar, the Managing Director of the CRBDA, Engr. Bassey Nkposong, urged Nigerians to steer clear of defecating in rivers.

Nkposong averred that most sicknesses and death experienced by Nigerians came about as a result of people defecating and emptying sewage into the rivers.

He said that when fishes eat up faeces and filth accompanied with sewage, chances of one falling sick and subsequent dying due to virus in the stomach of fishes that feeds from human faeces and sewage emptied are tripled.

The MD while condemning defecating in the waterways stated that the culture of defecating in the rivers has been responsible for the dwindling aquaculture,whereby Nigerian fishes had gone down at the international fish market, and therefore advocated for a legislation and draconian penalty that can reverse the ugly trend.

He said, “Over the years, the fish department are completely gone down because internationally, most of our fish are not fit for international consumption.

“It’s high time to note that our rivers are not refuse dump, and it is against good conscience to defecate in the rivers, as pollution may be the cause of sickness and death.

“It is important we kick against the discharge of sewage into our rivers, while at the same time discourage the dumping of untreated effluent into the rivers.

“As we join the world in celebrating this year’s World Rivers’ Day, we call on all, especially those in our catchment, to see the river as a double edged sword which can help to enhance lives, while at the same time being a source of destruction and agony for the entire community.

“The choice is in our hands, the time to act is now.”

Nkposong further stated that unless something is done urgently to reverse the trend and salvage the situation, many people are bound to die due to sicknesses caused by fish consumption.

He stressed that rivers were neither refuse dumps nor toilet for people to be passing faeces into, as doing so goes a long way in destroying the aquatic habitats that resides beneath the rivers.

Nkposong stressed that in all the activities of man, it is important to celebrate our rivers, adding, “We are very impressed with what nature has given us here and it’s important we nurture these gifts and used them judiciously.”

At the rally, members of staff of the agency distributed flyers for public awareness on the importance of the river, the need to maintain balance in nature, the roles of trees in the ecosystem, and the adverse effects nature has on the ecosystem when depleted.