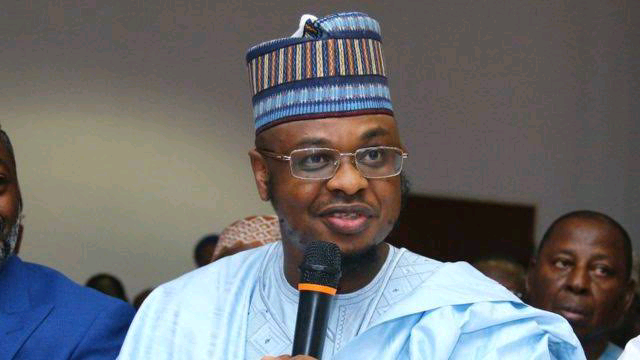 A Federal High Court, sitting in Lagos State has barred the Federal Government from blocking SIM cards not linked to National Identity Numbers, NIN, next month.

The Ministry of Communications and Digital Economy had, through the Nigerian Communications Commission, NCC, asked operators to block all SIM cards not linked to NIN by April 6, 2021.

The deadline had caused many Nigerians to gather at offices of the National Identity Management Commission, NIMC, in disregard of COVID-19 protocols.

But, a former second National Vice-President of the Nigerian Bar Association, NBA, and human rights lawyer, Mr Monday Ubani, had filed an originating motion and asked the court to stop the NCC from disconnecting all SIM Cards not linked to NINs.

The first to fourth defendants in the suit are the Federal Government, the Attorney General of the Federation, the NCC and the Minister of Communication and Digital Economy.

Ubani had sought for four reliefs, including an order that the two-week ultimatum was inadequate and would not only cause him hardship, but would also infringe on his fundamental right to freedom of speech and right to own property as provided for under sections 39(1) and 44(1) of the Constitution of the Federal Republic of Nigeria, 1999 (as amended).

He also sought an order of the court extending the deadline for the linkage of NINs to SIMs.

Delivering judgment on the matter, Justice M.A Onyetenu, ordered that the deadline be extended by two months from the day of the judgement.

The court also ruled that the ultimatum of April 6, 2021, be halted as the timeline is grossly inadequate and will not only wreck severe hardship, but will likely infringe on the fundamental rights of Nigerians to freedom of expression as guaranteed by Section 39(1)(2) and Section 44(1) of the 1999 Constitution

The judge further declared that in view of the COVID-19 pandemic and the rising cases in Nigeria presently, the deadline given to over 200 million Nigerians to register their SIM cards with NIN, will lead to a rush, thereby resulting in clustering of Nigerian citizens in NIN registration centres, subjecting them to the possibility of easily contracting COVID-19.

The judgment read in part, “I therefore make the following orders: An order halting the deadline ultimatum of 9/4/21 given by the 1st (Federal Government), 3rd (NCC) and 4th (Ministry of Communications and Digital Economy), respondents, to block all SIM cards that are not registered with the NINs at the expiration of deadline.

“An order directing the 1st, 3rd and 4th respondents to extend the deadline for the registration of SIM cards with NIN for at least another two months from the date of this judgment.”

In a letter addressed to the Attorney-General and Minister of Justice, Abubakar Malami, the plaintiff asked him to direct the relevant agencies to comply with the court judgment.

In the letter titled, ‘Notification to Comply with Judgment in FHC/L/CS/1834/2020’, Ubani asked the AGF to prevail on the Minister of Communications and Digital Economy, Isa Pantami, to reconsider the deadline.

The letter reads in part, “I therefore urge you to use your good offices to advise the Minister for Communications and Digital Economy, to respect our judiciary by complying with the above stated orders of the court.

“I further appeal to you to advise the honourable minister to review his stand on the ultimatum for the registration of SIM cards with NIN beyond the duration declared by the honourable court to at least a year.”

Meanwhile, there are indications that the April 6 deadline was still in force.

It was further gathered on Tuesday that all stakeholders in the telecommunications sector were still working to meet up with the deadline in order to avoid blocking the SIMs of telephone subscribers, who would be found wanting on April 6.

It was also learnt that telecommunications firms had, however, completed the process of linking the SIMs and NINs of subscribers who already had their NINs.

When asked if there would be an extension of the April 6, 2021 deadline, the Chairman, Association of Licensed Telecommunications Operators of Nigeria, ALTON, Gbenga Adebayo, said that operators in the sector were working hard to meet up with the deadline.

He said, “We, all the stakeholders, are working towards the April 6th deadline. We are working round the clock to meet the deadline as set.”

On December 15, 2020, the Federal Government declared that after December 30, 2020, all SIMs that were not registered with valid NINs on the network of telecommunications companies would be blocked.

It later extended the December 30, 2020 deadline, following widespread opposition against the earlier announcement and gave three weeks’ extension for subscribers with NIN from December 30, 2020 to January 19, 2021.

It also gave six weeks’ extension for subscribers without NIN from December 30, 2020 to February 9, 2021, but many organisations called for further deadline extension or outright suspension of the NIN registration process, due to the large crowds who had yet to get their NINs.

On February 2, 2021, the government listened to the deadline extension call and shifted it to April 6, as it also announced that a total of 56.18 million NINs had been collected and submitted for linkage at the time.

Commenting on the completion of the NIN/SIM integration process, the President, Association of Telecommunications Companies of Nigeria, Ikechukwu Nnamani, ATCON, said the focus of telcos had been shifted to the registration of citizens who do not have NINs.

Responding to an enquiry on the level of progress so far recorded in the process of linking SIMs with NINs, he said, “Yes it has gone very well.

“The NIN/SIM integration process is complete from the telecoms side and the major focus now is how to register those that do not have NINs so that more people are in the system. That is the major focus for now.”

When asked to provide further explanation as to whether all SIMs had been linked to NINs, Nnamani replied, “It means all SIM cards with NIN have been integrated.

“But remember the problem and challenge was never this. The challenge was those with SIM but without NIN. That is why the larger effort is on getting people properly registered.”

Asked to state the possible number of SIMs so far linked with their respective NINs, the ATCON president said, “Please get this information from NIMC (National Identity Management Commission).

“The agreement is that you (should) avoid getting conflicting data, the information on how many people have been properly registered with NIN should be given by NIMC.”

When contacted, the spokesperson, NIMC, Kayode Adegoke, promised that he would send the updated information on NIM/SIM integration to our correspondent, but had yet to do so despite repeated calls.

Also speaking on the development, the ALTON chairman said telcos had made a lot of progress.

On the number of SIMs linked with NINs, he replied, “Information about numbers will be provided by end of the week.”

The spokesperson of the NCC, Ikechukwu Adinde, also promised to provide the numbers by the end of the week.