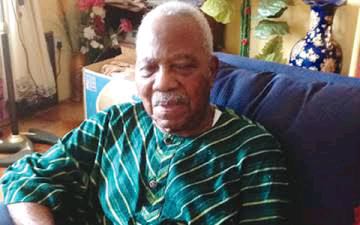 Leader of pan-Yoruba socio-political organization, Afenifere, Chief Reuben Fasoranti, has said that a new dawn of peaceful co-existence, safety and security of life and property, economic redemption, will soon be heralded in Yorubaland.

The former Commissioner for Finance in Ondo State during the tenure of late Adekunle Ajasin, gave the assurance, while speaking during a ceremony to mark his 95 birthday anniversary in Akure, the Ondo State capital.

A release by the National Publicity Secretary of the organization, Comrade Jare Ajayi, and made available to journalists in Ibadan, yesterday, said that Fasoranti expressed serious concern about the social, economic and security situations in Nigeria today, lamenting that Nigeria of their dream in the years preceding and immediately after independence “was totally different from the Nigeria that we have today – unfortunately for the worse.”

The statement quoted Fasoranti as saying that Yorubaland was not exempted from the worrisome situation, “since Yorubaland is part and parcel of the country, Nigeria.”

The Afenifere leader was however optimistic that very soon, the nihilistic situation would be halted, “and we will have a new nation in which every citizen will live to the best of his or her God-given potentials. For this to happen however, we must change our attitude positively. Those in government must change their attitude and ensure equity, justice and fairness. They must eschew nepotism that is now the order of the day presently.”

The frontline educationist stated that Yorubas do not engage in quick-fix for problems that are deep, saying, “That is why we are advocating for restructuring, because we believe very strongly that it is through restructuring that permanent solution to the hydra-headed problems Nigeria is facing presently can be found.”

Thanking the Almighty God for sparing his life thus far, Chief Fasoranti expressed appreciation to all his well-wishers.

Also speaking at the occasion, Afenifere’s acting Leader, Chief Ayo Adebanjo, expressed gratitude to the Almighty God for the life of Pa Fasoranti, praying that the elder statesman would still live for long in good health and joy.

Corroborating what the Leader said concerning Nigeria, Adebanjo maintained that if the country had not deviated from the path of true federalism and allow the rule of law to prevail, “we would not have been in the mess in which we are today.”

He added that going back to true federalism, which is the hallmark of restructuring that Afenifere is advocating, “is the only instrument to safe the country from the precipice and total collapse presently staring it in the face.”

Adebanjo expressed joy that many, in different parts of the country, are now embracing the concept, restructuring, saying, “The government of President Muhammadu Buhari should do the needful by constituting an assembly of all nationalities in the country to come up with a Constitution for a restructured Nigeria. The report of the 2014 Confab can be a working instrument.”

The lawyer-turned politician added that Afenifere is poised to ensure that no inch of Yorubaland is colonized anymore and that every Yoruba person is able to pursue his or her legitimate businesses freely and safely “without having to fear of any attack.”

The Deputy Leader of the organization, Oba Oladipo Olaitan, who lauded the dedication of Afenifere leaders, added that “it is their dedication and commitment that have sustained the body over the years,” stating that their commitment had always been to truth and what would make life more abundant for the people.

Corroborating Olaitan, Bashorun Sehinde Arogbofa, who served Afenifere as Secretary General for years, stated that right from the days of Chief Obafemi Awolowo, when Afenifere was formed, commitment to true federalism and steps that would ameliorate the challenges of life “have been what Afenifere has been pursuing. And pursuing vigorously.”

Arogbofa, who is also the Afenifere chairman in Ondo State, asserted that the body is ever ready to serve the best interests of the Yorubas at all times, and called for the cooperation of everybody.

Former Secretary to the Government of the Federation, SGF, Chief Olu Falae, also joined well-wishers to express appreciation to God for the meaningful life that Pa Fasoranti has led, praying that the Almighty will further elongate his life in good health and joy.

On the situation of the country, Falae, who is also the Olu of Ilu-Abo, expressed the hope that the oppressive darkness will make way for light very soon.

The Bishop of Akure Diocese, Right Reverend (Dr.) Simeon Borokini, while speaking during the dedication of a building at Anglican Grammar School, Iju/Ita Ogbolu, Ondo State in honour of the man who established the school in 1957, eulogized Pa Fasoranti, for his doggedness and particularly Godliness, calling on the youths to learn from the old man’s life “with a view to have a fulfilling life like him.”