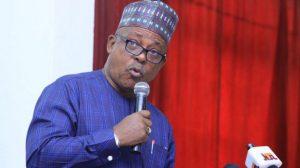 The main opposition party, the Peoples Democratic Party, PDP, has told Nigerians to hold President Muhammadu Buhari and the All Progressives Congress, APC, responsible for the negative impacts the proposed travel sanctions imposed on Nigeria by the United States would bring.

The PDP, in a statement signed by its National Publicity Secretary, Mr Kola Ologbondiyan, on Saturday and made available to newsmen, describes the sanction as yet another huge misfortune brought upon Nigeria and her people by the Buhari Presidency and the APC, which have continued to wreck our nation with its compromised handling of security issues, in addition to escalated bloodletting and human rights violation under their watch.

Lamenting that the travel ban will have grave consequences on economic, educational, and healthcare opportunities; hurt family and social ties as well as further put pressure on our overall national economy, the PDP said, More depressing is that the APC and the Buhari Presidency have been reversing diplomatic gains achieved by previous administrations, while gradually pitching our nation against other countries of the world with its poor record on security, corruption and human right issues.

“The PDP is worried that our nation that have become a global destination and investment hub under the PDP, is now being pushed back to a pariah status under the incompetent and divisive APC, as reports from other members of the international community, including credible international organizations, have continued to raise concerns on security and human right issues under the Buhari administration.

“Only recently, our nation was rated as third country with the highest level of terrorism in 2019, after Iran and Afghanistan, in the Global Terrorism Index rating by the Institute for Economics and Peace, IEP.

“This is in addition to damning reports by reputable organizations including Amnesty International, AI; Transparency International, TI; European Union, EU; the United States Department of State, among others, which in various independent reports, raised grave issues of escalated corruption, violation of human rights, disregard to rule of law, abuse of processes, election rigging and poor handling of security issues under the APC”

The party lamented that the “APC administration has failed to rejig its security high command, despite the calls by Nigerians, in the face of worsening security challenges and mass killings in our country under their charge.”

Ologbondiyan added, “It is also worrisome that the APC-led administration had failed to take a decisive step to apprehend and prosecute perpetrators of acts of terrorism, including the mass killings in Benue, Nasarawa, Bauchi, Taraba, Kogi, Adamawa, Borno, Yobe, Zamfara, Kaduna, Ekiti, Kogi states and other parts of the country under the current administration.”

Restating that such failures by the APC had continued to bolster insurgents, bandits and kidnappers to continue to launch deadly attacks on Nigerians, the opposition party said, “Moreover, the APC has failed to account for hoodlums and political mercenaries it imported from neighboring countries to assist in unleashing violence on Nigerians during the heavily rigged 2019 general elections.”

The PDP therefore urged the “National Assembly not to relent in its efforts to take decisive action on security, as the travel ban is a wake-up call on our leaders and all critical stakeholders to address the issues at stake.”

It also called on the United States to ensure that the ban does not hurt innocent Nigerians, who are also bearing the brunt of the poor handling of security in our country under the APC administration.