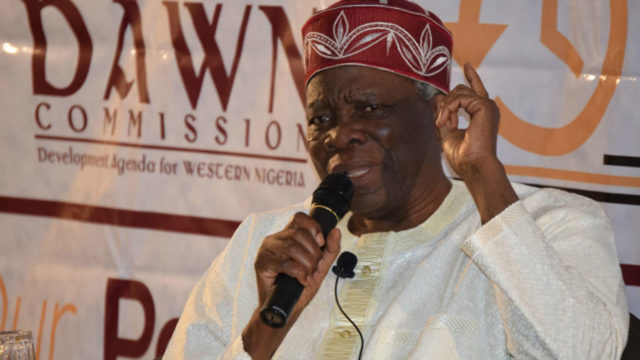 The Yoruba speaking nation of Nigeria has been accepted as the 45th member of the Unrepresented Nations and People’s Organization, UNPO, according to an elecronic statememt made availabke to newsmen by the leader of the Yoruba World Congress, YWC, Emeritus Professor Banji Akintoye.

In the statement titled: ‘Yoruba Nation Gains UNPO Membership,’ Akintoye said this development represents a very important step in the collective quest of well-meaning Yoruba people to achieve the goal of dignity and self-determination.

Akintoye said with Yoruba nation’s membership of UNPO, just like the Catalonian people of Spain, the Yorubas can put forth their organs of representation – such as a people’s parliament and an indigenous people’s government, with a flag as our symbol, which according to him are all legal.

He added that the UNPO membership affords the Yoruba nation the opportunity to participate in advocacy training, worldwide cultural festivals, election monitoring/observation, and sports activities, among the unrepresented nations.

In a letter addressed to Akintoye through the YWC Coordinator for Europe, UNPO Secretary-General, Ralph Bunche, expressed his gladness to welcome the Yoruba nation as a new member of the international organisation, adding that the organisation is looking forward to working closely with the Yoruba people.

The statement added, “The Unrepresented Nations and Peoples Organization, UNPO, is an international membership-based organization, established to empower the voices of unrepresented and marginalized peoples worldwide and to protect their fundamental human rights.

“It was formed on 11 February 1991 in The Hague, Netherlands. Its members consist of indigenous peoples, minorities, unrecognized peoples or peoples of occupied territories.

“UNPO works to develop understanding of, and respect for, the right to self-determination, provides advice and support related to questions of international recognition and political autonomy; trains groups on how to advocate for their causes effectively, legally, devoid of violence; and directly advocates for an international response to human rights violations perpetrated against UNPO member nations or groups.”

Akintoye, a renowned Emeritus Professor of History, disclosed that some formerly unrecognized nations who were members of UNPO but are now independent nations and members of the United Nations are: the Armenia, East Timor, Estonia, Latvia, Georgia and Palau.

He stressed that the international organisation, like many others, have the capacity to help the Yoruba nation achieve her goals within the Nigerian federation.

The statement further added, “The peoples represented within the UNPO membership are all united by one shared condition: they are denied their equitable level of representation and voice in the institutions of the countries to which they currently belong and in international governance.

“As a consequence, their opportunity to participate on the national or international stage is limited and unfair, and they struggle against difficulties in their effort to realize their rights to civil and political participation and to control their own economic, social and cultural development.

“In many cases, they live under pressure of the worst forms of violence and repression, such as is being perpetrated by armed Fulani herdsmen and Fulani militias, as well as by terrorists Boko Haram, against many peoples of Nigeria, including our Yoruba nation; which violence and repression are being adroitly and surreptitiously supported by the government of Nigeria. In some cases, members of UNPO need serious help, because they live in countries and under governments that actively resist their progress and destroy their achievements, as our Yoruba nation lives in Nigeria.

“The UNPO is able to address issues that often remain hidden because it has the freedom to raise issues that others cannot raise due to political or funding constraints. Today, UNPO has more than 40 member nations.

“Having identified ourselves as an indigenous nation, the UNPO recognition is the first stage towards achieving our goal of self-determination, and this is permissible and lawful under existing laws and international instruments.

“The United Nations Conventions and Proclamation of the Rights of Indigenous Peoples (September 15, 2007) grants indigenous peoples and nations the rights to self-determination.

“Membership of UNPO gives our Yoruba nation the privilege of having UNPO work for the protection and advancement of our rights as an indigenous people in Nigeria. And that empowers us to form our Customary Law Indigenous Government for organizing our struggle for self-determination, and for serving as our sole representative in the United Nations, where we shall seek for the retrieval and restoration of our sovereignty.

“Article 20 of African Charter on Human and People’s Rights (Ratification and Enforcement) provide that “Colonized or oppressed peoples shall have the right to free themselves from the bonds of domination by resorting to any means recognized by the international community.

“’Any means recognized by the international community’ refers to such as acts within the rule of law, peaceful acts, and diplomatic negotiations, but excludes acts of violence, acts of war, and acts of terrorism.

“In the light of the foregoing, the Yoruba World Congress hereby joyfully congratulates all Yoruba citizens of Nigeria at home and abroad, all Yoruba elders, all Yoruba religious, political, business, professional and community leaders, and all Yoruba youths and children.

“We Yoruba have hereby secured a very important support for all peaceful and lawful actions by our patriots, organizations and activists in the struggle to defend, protect and advance Yoruba interests and Yoruba self-determination.

“It is the right and duty of all of us to evolve together our nation’s use of this wonderful gift, and the Yoruba World Congress offers its brotherly hand of love, cooperation and collaboration to all persons, leaders, rulers and organizations in the Yoruba family.”