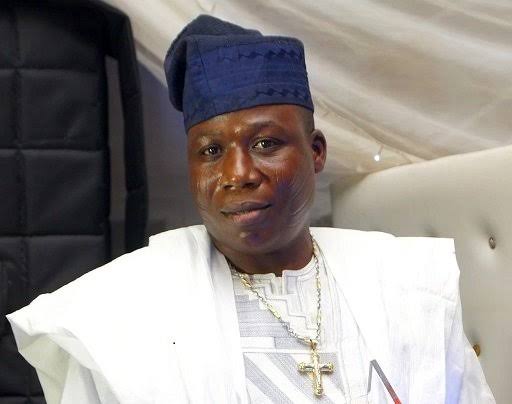 Gangan is the hourglass-shaped talking drum, covered by cowskin that talks in the voice of man. Unique, the ‘gangan’ talking drum is Yoruba’s invaluable gift to the world.

Quite unlike countless artefacts stolen from Africa, and transported to Europe, America and beyond, I believe that the talking drum was left unstolen because the ‘gangan’ can’t talk without the dexterity of the fingernails – a fact supported by the Yoruba proverb, ‘ati ran’mu gangan, kii s’eyin eekanna.’

But dexterity, in the case of ‘gangan,’ belonged to the black man. Probably frustrated by indexterity, the white man let the talking goatskin, the wooden hourglass and its strings be.

Two weeks ago, the ‘gangan’ roared in Igangan town of Ibarapa in Oyo State. Just like in the days of yore, when drummers accompanied warriors to the warfront, I heard the ‘gangan’ clearly, saying, “Sunday Igboho n pa’le ogun mo, orisa ma je o t’enu mi ja’de!” Meaning: “Sunday Igboho is preparing for war, may the gods forbid me saying so.”

About three weeks ago, when I interviewed the Akoni Oodua of Yoruba land, Chief Sunday Adeyemo, alias Sunday Igboho, he talked passionately about Yoruba culture and tradition.

Despite the mystique surrounding his persona, Igboho was respectful. Without knowing my age, he accorded me the honour due to an elder brother, using the English noun, ‘sir’, and the Yoruba pronoun, ‘e’, both of which confer seniority – while talking to me.

He said, “I will stake N10 million against the N10 million of anyone who doesn’t believe African bulletproof exists. The person should bring his gun and shoot at me. I will win the bet.”

A few days after Igboho spoke to me about ‘ayeta’, he visited Igangan and stood in the gap for his embattled ethnic nationality, which has come under incessant murderous attacks by Fulani herdsmen, while the Yoruba political leadership, with the exception of Governor Rotimi Akeredolu of Ondo State, maintained criminal silence.

Shortly after the ‘gangan’ thundered victoriously in Igangan, echoing the liberation of Oduduwa children from rape, kidnapping and killings by Fulani herdsmen, a dirge was heard at the Tinubu Square in Lagos.

Ogini? Kilode? Wetin happen? Who die? Media attention shifted swiftly to Tinubu Square, where a torn ‘gangan’ was found in the possession of a footman singing the songs of sorrow and crying more than the bereaved.

What’s the mission of this flunkey? The manservant wanted to outshine his master and reap quick media traction from the emerging Igboho sensation, but met his waterloo in a classic comeuppance.

Blinded by ambition, the opportunistic, imprudent and chauvinistic fellow danced naked to some anti-FEMInist music at the popular OJODU bus stop, near Berger, in Lagos, when a rickety okada crushed him for his blasPHEMY.

The Igboho I know is a commoner, who doesn’t have access to questionable public funds like Nigeria’s politicians in the federal executive council, state executive councils, federal and state legislatures, and local government councils.

The Igboho I know is a 48-year-old tribal-marked man, who spoke the only language President Muhammadu Buhari understood – force – forcing the Northern President to sack his redundant service chiefs after yearly strident calls for the removal of the underwhelming military chiefs by Nigerians fell on deaf ears.

Shamefully, in order for the removal of the service chiefs not to appear as forced by the Igboho enigma, Buhari rewarded the failed military chiefs with ambassadorial posts, when they’ve not even turned in their letters of stewardship for assessment.

The cluelessness of the trivial Buhari administration is further highlighted by the three-month tenure extension of the Inspector General of Police, IGP, Mohammed Adamu, on the premise that the President is searching for the right candidate. This is the most stupid excuse for dullness. I don’t know how Buhari would use just three months to search for Adamu’s successor, when he couldn’t do so in the last two years Adamu has been in the saddle.

The Igboho I know is a tribal lord, just like Buhari, who told all other Nigerian ethnic nationalities to vacate their lands and water for his Fulani kinsmen to freely use for Ruga.

Sadly, it’s on record that no Fulani herdsman has been prosecuted and brought to justice by the Buhari presidency, despite damning evidence of complicity.

In its characteristic knee-jerk approach to issues, security sources said the Presidency’s first reaction was to attempt to arrest Igboho, but was advised against such a move for fears that the tension already generated by Fulani killings nationwide could result in simultaneous protests that would be larger than the #EndSARS riots.

The Sunday Igboho I know is far more compassionate and courageous than Vice President Yemi Osinbajo, Asiwaju Bola Tinubu, all Yoruba governors, except Akeredolu, all Yoruba leaders, ministers, senators, and House of Representative members, who have kept quiet, because themselves and their children are safe from killer Fulani herdsmen.

The same thing goes for 99.9 per cent of Yoruba obas, whose member, the Olufon of Ifon, Oba Adegoke Adeusi, was killed by suspected Fulani kidnappers, but who didn’t speak against the killing. Well, if a foremost oba was killed and Yoruba obas kept quiet, won’t they go dancing shaku-shaku, if sons and daughters of nobodies in their domains are killed or raped? Yet, this set of leaders clamour for constitutional empowerment.

Only the Alaafin of Oyo, Oba Lamidi Adeyemi, wrote an open letter to Buhari, warning of the tragic consequences of the actions of Fulani kidnappers, herdsmen, and the general insecurity in the land. A couple of other Yoruba monarchs may share Alaafin’s views, but they need to speak up against the killing and raping of their subjects.

The Igboho I know understands the language of the fascist Buhari regime. Force is the language. Former United States, US, President Donald Trump thought Nigeria was in a democracy when he asked Buhari why were Nigerian Christians being killed over an alleged Islamisation agenda.

Nobel laureate, Professor Wole Soyinka, General Olusegun Obasanjo, General TY Danjuma, Pastor Enoch Adeboye, Bishop David Oyedepo, emirs and numerous leaders of thought have warned Buhari that Nigeria was about to collapse, but the Katsina warlord will never listen, because the only language he understands is force.

If Abacha, Buhari’s benefactor, didn’t steal the country blind, maybe Nigeria would today have the capacity to store millions of COVID-19 vaccines about to be donated by western countries, but which are at the risk of getting spoilt as a result of inadequate power supply.

Since I met Igboho at the Osun Peoples Democratic Party, PDP, secretariat in the Dada Estate area of Osogbo in mid 2000, he has never changed from his down-to-earth nature. With what he did in Igangan, the puppy of Igboho is far better than the toothless and clawless lion of the Aare Ona Kakanfo, Gani Adams. I won’t gloat and beat my chest, saying I predicted the unfitness of Adams for the Kankafo post in 2017. The lesson I took away from Adam’s appointment was that to err is kingly, to forgive is divine.

My advice for the Igboho I know: You’ve blunted the sword of the Fulani with your palm, they’re coming from the highest places to demystify you. Be prepared, talk less, issue press statements. Nigerians are on your side, and they’re watching.