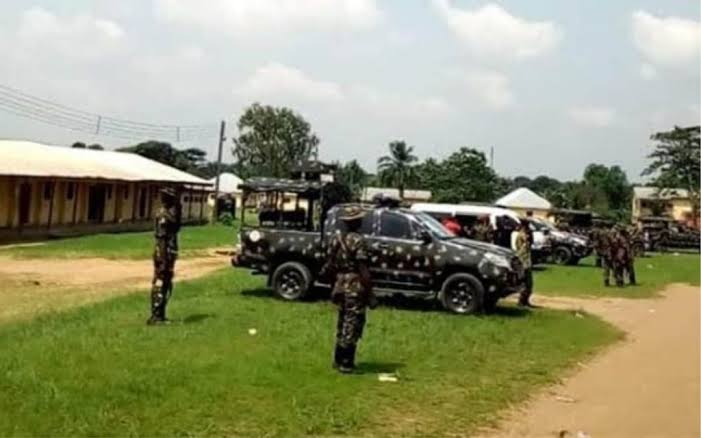 A group of armed robbers got the shock of their lives yesterday, when they were shot at as they tried to break into a soldier’s apartment in Ikeja,Lagos.

As the robbers attempted to break into Captain Olayiwola Stephen Adewale, at number 15 Sulaimon Street, Off Olagbade, Ikeja, his wife, out of fear went into her husband’s room, took his gun and shot at the door which the gang were trying to break in from.

She said, “I shot him with my husband’s gun, as they tried to break into our house.”

One of the gang members was found dead at the vicinity of the officer house, by the police who were contacted immediately after the attempted break-in.

Mrs Adewale said that she knew that if the robbers should break in, they would either rape her or her children, adding, “I summoned courage to open fire on them, in self-defense.

“The gun fell from my hand as I shot it. Maybe they thought it was a man who shot, so they ran away.”

Reacting, the army officer, Captain Adewale said, “I was surprise at her courage. She use to be a jittery person.”

Residents of the neighbourhood expressed their happiness at the army officer’s wife courage and action, saying that the thieves are fond of coming to steal phones and other gadgets.

Meanwhile, the police have advise residents of the street to be more security conscious, as according to them, the robbers might be people who know the vicinity very well.

The Divisional Police Officer of Allen Police Division, Mr. Ibrahim Bala, then said there promised the residents that security in the area would be beefed up, as the robbers might want to retaliate their humiliation and the death of their colleague.

He therefore urged the residents to call the police immediately whenever they suspect any strange movement in the area.