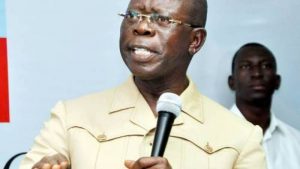 The National Chairman of the All Progressive Congress, APC, Mr. Adams Oshiomhole on Thursday February 13, distributed 200 bags of rice to persons displaced by various crisis in Taraba State to ameliorate their sufferings.

Taraba State Chairman of APC, Mr. Ibrahim El-Sudi, who presented the relief materials on behalf of the APC National Chairman, said the gesture was a personal effort of the chairman as part of his genuine concern for the good of the people.

Regretting that the state government has remained indifferent to the plight of the displaced persons in the state, El-Sudi assured that the APC would do everything within its powers to make life better for the people of the state though the party was not in power in the state.

He said, “Today, it is mixed feelings for us as a party in the state. We are grateful that we have these relief materials coming from our National Chairman, Comrade Oshiomhole, to distribute to the persons displaced by crisis in the state.

“We are happy that this gesture will go a long way in ameliorating their plight. We however feel sad that our people are displaced in their own state and are made to live under such conditions.

“It is also very regrettable that the state government has remained indifferent to their plight. The governor has not made the effort to visit even one of the IDPs camps or any of the crisis area, even for once to ascertain the level of damage or to at lease give the people a sense of his concern.

“We call on well to do individuals to support the displaced people so that they don’t have to go through such extreme difficulties.”

Noting that the six camps across five local government areas in the state were identified to benefit from the gesture, the Taraba APC chairman assured that the relief materials would get to the rightful beneficiaries directly to avoid any situation where someone will say rice meant for IDPs were diverted by APC in Taraba.

Our correspondent reports that symbolic presentation was made to IDP camps in Jalingo, while arrangements have been concluded to move the rice to the camps.

The Passage Of Professor Ibidapo-Obe