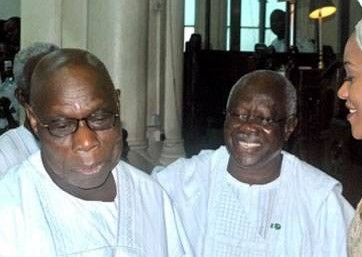 Former Deputy National Chairman of the Peoples Democratic Party, PDP, Chief Olabode George has described former President, Chief Olusegun Obasanjo, as an enigma who ruled the Nigerian nation, both as a military Head of State and as a civilian President.

George said this in a congratulatory letter he sent to Chief Obasanjo on his 83rd birthday, adding, “Obasanjo will remain forever an indelible symbol of national salvation and redeeming image as long as this country subsists in a union of common accommodation, embrace and unity.

“President Obasanjo has been immensely blessed by the Almighty God. He has always been privileged to be at the right place and at the right time in momentous historic occasions in the history of our nation.

“Warrior, hero, peacemaker, statesman, he was the one that providence thrust upon him the duty to receive the articles of cessation of hostilities that put an end to the civil war that tore this nation asunder for two years and six months.

“As the principal signatory who accepted the codes of surrender from Col. Philip Effiong on January 15th, 1970, President Obasanjo eventually rose to the iconic largeness as a healer of wounds, the mender of the broken places, the rebuilder of the weaken walls.

“A man of immense networking ability, the friendships he had cultivated across the world as a significant Statesman cut across virtually all continents. He is indeed a moral voice, a presence that represents dignity, integrity, national accommodation and patriotic relevance.

“He is without bias or malice. He speaks with frankness of purpose and with declarative truth.”

While saluting the former President as he added another year to his remarkable sojourn upon Mother Earth, George said, “You are indeed a great, inimitable asset to our nation.

“May the abundance of His Grace and the Blessings of the good Lord continue to abide with you and your family, now and forevermore. Amen.”