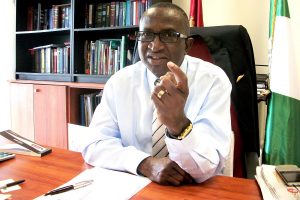 Former Chairman of the Governing Board of the Niger Delta Development Commission, NDDC, Senator Victor Ndoma-Egba, has lauded President Muhammadu Buhari for ordering the forensic auditing of the activities of the interventionist agency from inception to date.

Buhari has been widely applauded by various groups and individuals from within and outside the Niger Delta region for his directive on the forensic audit of the NDDC accounts, to ascertain what was responsible for the inability of the Commission to actualize its mandate two decades after it was set up.

Describing the step taken by the President as timely and long overdue, Ndoma-Egba insisted that the forensic audit would be concluded before a new board was inaugurated, the former Senate Leader said it was a step in the right direction.

The former chairman of the NDDC, from Cross River State, said his board which was dissolved in January 2019, after about two years of its inauguration, was planning to do a forensic audit of the agency’s operations, as part of its agenda to transform and reposition the commission for better performance.

He said, “Of course, it’s a welcome development. It was one of the things we had in mind when I assumed office as the NDDC board chairman. If you read my inaugural speech to my board when we were appointed you will see it there – I think it was item three or so – that we needed a forensic audit of the NDDC and we were working towards that before we left.
“I am very much in support of the move. Certainly, the NDDC needs a forensic audit. And that need has been there for a very long time. The President has taken the right step in the right direction.”

The stage is now set for the commencement of the forensic audit as the Federal Executive Council, FEC, last week reportedly approved the sum of N318 million for the engagement of a lead consultant.

According to the Minister of Niger Delta Affairs, Godswill Akpabio, whose ministry supervises the NDDC, the Lead Consultant is Olumuyiwa, Bashir and Co. Ltd.

Akpabio added that the three-member Interim Management Committee, IMC, of the interventionist body, constituted in October 2019, would collaborate with the lead consultant that is expected to divide the audit into nine lots, one for each state in the Niger Delta zone.

The NDDC was established by former President Olusegun Obasanjo in 2000, largely as a response to the demands of the Niger Delta people, with the sole mandate of ensuring the overall development of the oil-rich region of Nigeria, and “the mission of facilitating the rapid, even and sustainable development of the Niger Delta into a region that is economically prosperous, socially stable, ecologically regenerative and politically peaceful.”