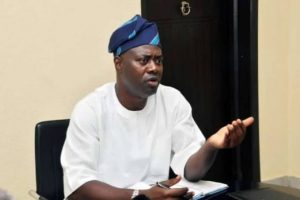 The Oyo State governor, Engineer Seyi Makinde, on Thursday, January 30, announced the approval of N500 million as counterpart funding for the World Bank-supported Nigeria Erosion and Watershed Management Project, NEWMAP, in the state.

The project is to enhance the control and prevention of flood, erosion and natural disasters across the nooks and crannies of Oyo State.

Governor Makinde, who made the disclosure while inaugurating the steering committee on NEWMAP, said that the Federal Government will also release $5 million as counterpart fund.

A statement signed by the Chief Press Secretary to Governor Makinde, Mr. Taiwo Adisa, quoted the governor charging the committee to judiciously utilise the funds within the time frame of the project.

The governor stated that the target was to end flooding, erosion and other natural disasters in the state within the duration of the project, which is expected to last for 18 months.

He said, “The NEWMAP programme, even though it started in 2013, Oyo State Government did not get admitted into that programme as a participant until 2015. The state government at that time also did not walk its talk by providing the seed fund needed to see the programme through. But the present administration has demonstrated commitment to the NEWMAP programme to the tune of N500 million, which has been provided.

“I am happy with the report that was presented to me that the World Bank Task Team and the Federal Government are ready to provide a matching grant to the tune of $5 million. The programme is time-bound and it’s going to end on June 30, 2021. So, we barely have 18 months to do this.

“I know free erosion sites have been identified. People from Iseyin going to Ado-Awaye and others within that axis have seen pictures of erosion sites and bridges being cut into two and communities not being able to access other communities freely. We have to work fast and that is why it is important for these committees to be inaugurated. So, I want to say that the fund for this programme has to be judiciously utilised and we should not spend a lot of time in fighting ourselves.

“It is a lot of work ahead of these various committees. I do know that you are all up to the task.”

The Steering Committee is chaired by the Commissioner for Environment and Natural Resources, Rt. Honourable Kehinde Ayoola, with the Permanent Secretaries of the Ministries of Lands, Finance, Works and Transport, Agriculture and Rural Development, Budget and Economic Planning, as well as representatives from local governments as members.

The inauguration ceremony had in attendance the Deputy Governor, Rauf Olaniyan; the Secretary to the State Government, SSG, Mrs Olubamiwo Adeosun; the Chief of Staff, CoS, Chief Bisi Ilaka; commissioners and other appointees.

It would be recalled that the lawmaker representing Iseyin/Kajola/Itesiwaju/Iwajowa federal constituency in the House of Representatives, Hon. Shina Peller, had on July 12, 2019 presented a report to Governor Makinde on the flooding in Kajola Local Government Area, which claimed lives and properties.