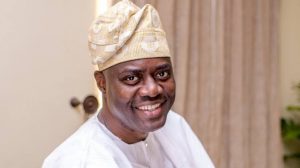 The Oyo State governor, Engineer Seyi Makinde, on Thursday, January 30, told the 33 caretaker chairmen of local governments and 35 chairmen of Local Council Development Areas, LCDAs, of the state that the people of the state expect massive development of the councils under his watch.

Makinde, who spoke at the Executive Council chambers of his office, told the chairmen that residents of the state expect the council helmsmen to be focused and diligent, as according to him, the people expect great improvements under their tenure.

This was contained in a press statement signed by the Chief Press Secretary to the governor, Mr. Taiwo Adisa, which also confirmed that the meeting reviewed the ongoing crisis rocking the local government system in the state.

The governor told the new chairmen to should see their appointments as opportunities to serve, noting that despite the distractions of parts of the councils by the sacked illegal chairmen, the caretaker chairmen must remain strong, steadfast and dedicated to delivering the dividends of democracy to the people at the grassroots.

He also disclosed that the state government had secured an interim injunction, restraining the Attorney General of Federation, AGF, the Inspector General of Police, IGP and the Commissioner of Police in Oyo State, as well as their agents, from disturbing activities at the local governments.

The governor said that the court remained the final arbiter in any dispute, adding that his government would respect the decision of the court in respect of the pending cases on the local government matter.

Makinde said, “This is about service to our people. Wherever you are, make sure you serve diligently and let them know what you are doing in that place. I have not had the time to meet with you face to face to tell you about the vision of this administration.

“Whatever happened in the past remains in the past. We have looked for the best hands we can join hands together to move this state forward and that exactly is what this government is all about. They can peddle half-truths and outright lies, but we should not be distracted. We need to be focused on the task at hand.

“We had an injunction against the Attorney General of Federation, Inspector General of Police and the Commissioner of Police in Oyo State and all their agents to allow us to run the local government administration according to the constitution of the Federal Republic of Nigeria.

“But as far as I am concerned, when we came in, in the eyes of the law, we did not meet any elected local government officials. We met pretenders and we have asked them to leave. And that is also the position of the law until the court says otherwise. So, I want you to be focused, single-minded and move away from business as usual.”

Makinde also told the gathering that in the last eight months, his government had been able to accumulate some money that could be channeled to instant development and transformation of the grassroots.

He said that his administration would work together with the chairmen to decide on projects for each of the local councils and how to go about executing them.

He added, “We have been able to accumulate some money for the local governments because since we came in and owing to the crisis too, we have not been able to judiciously utilize the money meant for that tier of government. But now that you are on the seat, we will all pull together, decide on the project for each of our local government and local council development areas. And once we have agreed, go ahead and execute these projects, because the people are waiting for us. They want to see developments at the grassroots and you are all the ones to make it happen.

“I want to once again congratulate you and let you know that there are several people that are qualified to sit in that position. So, you have to demonstrate the capacity to hold that position. On that note, remain strong, steadfast and dedicated and deliver dividends of democracy to our people.”