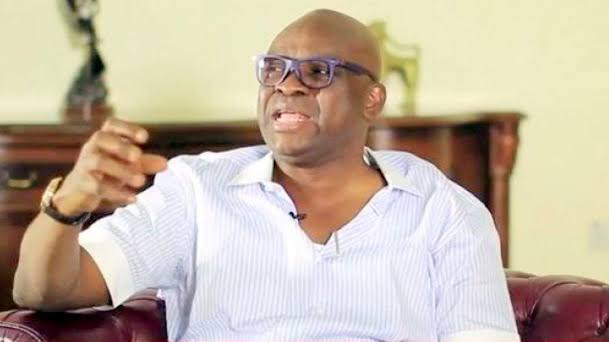 Former governor of Ekiti State, Ayodele Fayose, has been told to limit his ratings and confusionist agenda to his home state of Ekiti and stop poke nosing into the affairs the Peoples Democratic Party, PDP, in Lagos State.

A group within the Lagos PDP, ‘Lagos Democrats,’ in a release signed by its Coordinator, Mr Tajudeen Abinuwaye, and made available to the media on Wednesday titled: “Fayose: An Eccentric At Sunset, ” said, “Fayose should limit his rantings and confusionist  agenda to Ekiti. He should not push his luck too far. We respect our elders in Lagos. We even rever them. While we  will not roll in the mud with Fayose, we will always show him that Lagosians have a way of engaging those who don’t respect their elders.

“It appears to us that Mr Fayose is becoming increasingly unstable. He seems to have reached some deep bend. This erratic no-gooder came to Lagos yesterday blabbing his mouth like someone with more than a screw loose.

“Like an ill-mannered, ill-born, and uncouth outcast, Fayose dismissed all our elders and leading lights with the foulest of language and finally saying they should be retired.”

Describing Mr Fayose as being well known for his primitive, gangster-like, dirty and dubious politics, the Lagos Democrats said, “He is a loose cannon, firing with neither tact and wisdom nor basic common sense.

“But coming to Lagos from his native backwaters of Afao-Ekiti in a rough and tumble idiocy is taking insanity too far.

“We are equally disappointed with some elders who sat through Fayose’s obscene display and vacuous diatribes without chastising him.”