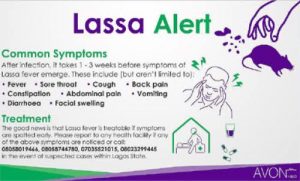 By Benjamin Awua, Jalingo
A medical doctor with the Federal Medical Centre, Jalingo, has tested positive to Lassa fever, management of the hospital has confirmed.
The hospital’s Acting Head of Clinical Services, Dr. Ahmed Jatau, who disclosed this on Tuesday, January 28, in an interaction with journalists, further disclosed that six suspected cases of Lassa fever were reported with four deaths, adding that the affected medical doctor was currently undergoing treatment at Iruwa Specialist Hospital in Edo State.
Dr. jatau said, “We sent 10 samples to NCDC for testing. We had six tested positive cases, out of which four had died even before their result came in.
“For the remaining two cases, one has been discharged while the other, who is our own staff, has been transferred to Iruwa Specialist Hospital for further treatment, because we don’t have a dialysis unit here.
“The information from the specialist hospital is that he is doing well after the first dialysis session. We have also fumigated the house officers quarters against rodents.”
Meanwhile, a civil society organisation, CSO, in the state, Maigodiya Centre, which has been in the fore front of sensitizing members of the public on how to prevent Lassa fever has called on government to do more to prevent fatalities in Lassa fever cases.
Maigodiya Centee director, Aliyu Tukur, noted that reactive response to yearly outbreak of the virus has led to recurrent fatalities, which he said could have been prevented if government was proactive.
Tukur therefore urged government to combine massive sensitization of the public with provision of adequate health facilities to confirm and treat cases of Lassa fever in the country without further delay.