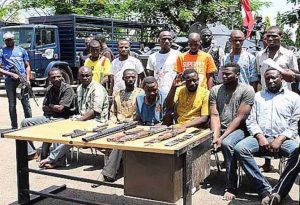 By Adeniyi  Adedeji, Ilorin.
The trial of the Offa armed robbery suspects, which has been on a very long adjournment came up on Tuesday, January 28, in Ilorin, the Kwara State capital.
But the trial, before an Ilorin High Court, presided over by Justice Haleema Salman, was stalled due to the absence of the prosecution witnesses.
A bloody robbery, on April 5, 2018 was a gloom attack on diverse banks in Offa, where not less than 30 persons including police officers and pregnant women, were gruesomely killed.

The prosecution counsel, Bola Gold, had told the court on Tuesday that police officers, who are the prosecution witnesses in the matter, were on national assignments in last Saturday’s rerun elections in some parts of the country, and were yet to return to their bases.

He therefore prayed for an adjournment, which the defence counsel, Mathias Emeribe, did not object to.
Justice Salman, while granting the adjournment request, warned both counsel against unnecessary delay in the hearing of the matter.
She had earlier expressed her displeasure that no appreciable progress had been made in the hearing of the case since 2018 when it started, pointing out that requests for adjournments by the counsel had been responsible.‎
She subsequently adjourned the case to February 10.
Speaking with journalists later, counsel to both parties assured of their preparedness to ensure speedy disposal of the matter.
All the accused persons were present in court on Tuesday.