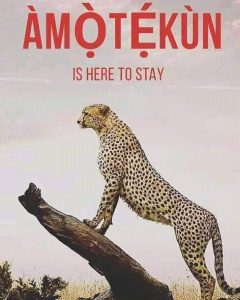 The leadership of the Herbalists/Traditionalists Association of Nigeria, HTAN, has announced its resolve to give necessary support to the newly formed South-West Security Network, code-named “Amotekun”, in terms of manpower.

The association, rising from a two-day meeting held at Government Residential Area, Ikeja, Lagos State, said that to start with, it would empower Amotekun with 18,000 personnel drawn from across the six South-Western states of Yorubaland.

Speaking with newsmen after the meeting, the national secretary of the association, Dr  Fakayode Ifayemi, said that the association in each of the states would produce 3,000 volunteers to make up the 18,000-man benchmark.

“Like we have always said, some of the hoodlums who have stalked Yorubaland don’t just rely on fire-arm power. They carry charms, amulets and chant incantations to have their way and cause incalculable damage.

“But our men drawn from among the herbalists and traditionalists will be on ground to counter the supernatural powers being used by these criminals.”

Ifayemi also said the association had resolved to place all herbalists and traditionalists in its fold on oath, never to involve in the indecent practice of helping criminals with supernatural powers.

He said the South-West governors gladdened the hearts of native herbal practitioners when they came up with the Amotekun idea, noting that the activities of kidnappers, mostly from other zones of the country, in Yorubaland, had become a grave embarrassment.