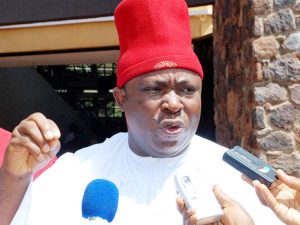 Former Vice Chairman, Senate Committee on Labour, Employment and Productivity, Senator Victor Umeh, has said that Nigeria was a lot better under the arrangement where governments at the regional level were allowed to control resources found in their areas, but only had to pay royalty to the central government.

Umeh, a former National Chairman of the All Progressives Grand Alliance, APGA, who represented the people of Anambra Central for seventeen months in the 8th Senate, gave the indication in an interview.

Lamenting that the situation as it obtains today, where too much power is vested at the centre, thereby giving the central government the leeway to run the country as a unitary system, the former parliamentarian noted that the 1966 coup d’état which disrupted Nigeria’s democracy at that time was the beginning of the country’s problem.

He said, “If that coup hadn’t taken place, our problem may not have been this bad today. Even though there were challenges in the country before the coup, but Nigeria was running a regional system of government – a parliamentary system of government – and the regions were pursuing development aggressively devoid of any problem. We had eastern, western and northern regions. We also had the mid-western region which was later created.

“And all these regions were developing at their own paces with the resources available to them. They were contributing royalties to the Federal Government of Nigeria. You could see that the speed of development was quite high. And people controlled the resources available to them in their various regions. But, that coup that came in January 1966 overthrew the democratic government in place and brought in a military government headed by Aguiyi Ironsi.

He said that for instance, while there was the federal police, the regions also have regional police, adding that the whole clamour for restructuring and the fair call for return to regional arrangement today is because the arrangement we have now has not helped the country.

According to him, “the civil war that followed the 1966 coups brought distrust within the Nigerian nation. The Nigerian people no longer see themselves as one. Other nations of the world fought wars and they came out stronger. America, for example, fought so many wars. But, America today is prided as the strongest nation in the world. The different internal wars fought in America did not drag the country back. Rather, the country became stronger through those wars. The way to build a nation is to pass through stages of disagreements, particularly in the case of Nigeria, where we have so many ethnic nationalities that make up Nigeria.”

He added, “Regrettably, we have not been able to properly deal with the aftermath of the Nigerian civil war. The misgivings triggered off by the civil war are still there.  Ethnicity has remained a constant feature of Nigerian politics. There are about over three hundred ethnic nationalities in Nigeria. These are people who speak different languages; people who have different religions and cultures. All of them are found in the geographical enclave called Nigeria. Any nation that has this kind of configuration will certainly need exceptional and extra-ordinary leadership to keep the people together. And the only thing that can bring people together will be equity and fairness.”

He averred that disappointingly, we have not had leaders (either through the military or civilian dispensation) who saw every ethnic nationality in Nigeria as an important part of the country, adding that had we had such people as leaders, Nigeria would have been very strong in its diversity.

He said, “But it has not been so. It has been a situation where people who found themselves in power take power to the exclusion of others. And it has continued to generate tension. There is a growing disaffection over the way things have been done. Nigeria has continued to run a unitary system of government, never mind that they call it federal system of government. Nigeria is controlled from the centre. Whoever gets the mantle of leadership of the country controls everything happening in every part of Nigeria.”