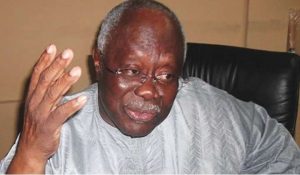 Former Deputy National Chairman, South, of the Peoples Democratic Party, PDP, Chief Olabode George, has said that God will determine whether he will run for the 2023 presidential election or not.

Speaking in Lagos when some youth groups paid him a solidarity visit, George said many Nigerians mooted the idea of running for the presidency to him, but he is still keeping his card to his chest.

George, who just returned to the country from the United Kingdom, said pressure is being mounted on him to run in 2023, but he is more fixated on how to stabilize and unite Nigeria at this point in time.

He said, “Yes, people mooted that idea of presidential or no presidential, but I keep my card to my chest.

“People mooted it, initially we played and laughed over it, but you see, 2023 is a long haul from now; and if people are wishing you well and are showing such good things to you, you don’t deflect it, but time will tell.”

Stating that the primary concern of all Nigerians at this point is how to rebuild the broken wall of the country, George said he possesses the requisite knowledge and experience that he can share to make the nation better.

He said, “We know there are managers now. Our major concern should be what role are they playing? How well are they managing the resources of the country?

“2023 is still a long time from now, that is about three years from now. Who knows who would even be alive by then? So, let us do the needful first and stabilize the platform on which you are going to move.

“For me, I am more concerned now with the image of the country.  If you see the image of our nation, you will weep. I asked a simple question, where is that giant of Africa? You know that was our nickname before.

“That is why I said everybody, in every corner, cool your temper. Hunger has no tribal marks, hunger doesn’t wear religious caps and it is all over the countries. If the platform is wobbling, a little wind can blow it up. We must not pray for that.”