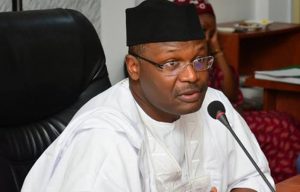 The Independent National Electoral Commission, INEC, has fixed the gubernatorial elections for Edo and Ondo states for September 27 and October 10 respectively.

And with the removal of the delisted parties from the list of registered parties, Nigeria now has 18 recognised political parties that can participate in future elections.

The INEC chairman said that two political parties registered after the 2019 general election, the Action Peoples Party, APP and Boot Party, BP, will continue to exist.

“Prior to the Fourth Alteration, the Electoral Act 2010 (as amended), had provided for the deregistration of political parties. Based on this provision, the commission, between 2011 and 2013, deregistered 39 political parties.

“However, several of the parties challenged the power of INEC to deregister them, particularly on the grounds that the Electoral Act is inferior to the Constitution and that the deregistration infringed their fundamental rights under the same Constitution.

“Subsequently, the courts ordered the commission to reinstate the parties. It was for this reason that the National Assembly amended the Constitution to empower the Commission to deregister political parties on the following grounds: breach of any of the requirements for registration as a political party, failure to win at least 25 per cent of the votes cast in one state of the federation in a presidential election or 25 per cent of the votes cast in one local government area of a state in a governorship election and failure to win at least one ward in a chairmanship election, one seat in the national or state assembly elections or one seat in a councillorship election.

“In order to implement the provision of the Fourth Alteration to the Constitution, the Commission carried out an assessment of political parties to determine compliance with the requirements for their registration.

“Similarly, following the conclusion of the 2019 general elections, including court-ordered re-run elections arising from litigations, the commission was able to determine the performance of political parties in the elections.

“In addition, they were also assessed on the basis of their performance in the area council elections in the Federal Capital Territory, FCT, which coincided with the 2019 general elections.

“It should be noted that the FCT is the only part of the country where INEC is empowered by the Constitution to conduct local government elections.

“Consequently, the commission has determined that 16 political parties have fulfilled the requirements for existence based on Section 225A of the 1999 Constitution (as amended).

“Seventy-five political parties did not satisfy the requirements of the Fourth Alteration to the Constitution. However, one of the political parties, the APP, filed a suit in court and obtained an order restraining the commission from deregistering it. Consequently, the party remains registered pending the determination of the case by the court.

“The new political party, Boot Party, BP, registered by court order after the 2019 general election will also continue to exist.