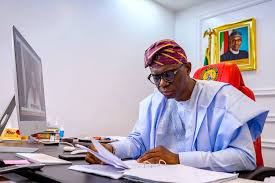 Speaking during the signing at Lagos House, Marina, Sanwo-Olu said that the budget has a capital to recurrent ratio of 60:40.

Sanwo-Olu added that with the passage of the bill, government will continue its work of rebuilding Lagos, advancing economic growth, and expanding opportunities for Lagosians to flourish.

He said, “The quick passage of the bill reflects the harmonious relationship between the state Executive and the Legislature, as well as our mutual dedication to the progress of our state and the prosperity of Lagosians.

“You will recall that on November 10, 2020, I presented to the House of Assembly the 2021 Appropriation Bill of N1.55 trillion, which we christened the ‘Budget of Rekindled Hope.’

Insisting that 2020 would go down in history as a peculiar year largely defined by the COVID-19 pandemic and the #EndSARS protests, the governor said that the protest was recklessly hijacked by those who destroyed some public assets and private businesses.

He said that the state was, however, fortunate to be going into the New Year with an already passed budget, which would help to expedite recovery.

He said that a significant portion of the budget had been committed to human capital development, youth engagement, social intervention initiatives, and the completion of ongoing projects.

Assuring that the 2021 budget would be prudently implemented with the people as focus, as the government was determined to provide the right economic environment for Lagos people to thrive; Sanwo-Olu added that as the world combats coronavirus, government will make the necessary sacrifices to further place the state on the path of abundance and economic recovery.

He added, “We are going into 2021 with the unwavering determination to engender sustainable and inclusive growth.

“I promise Lagosians that the 2021 budget will indeed rekindle hope, deliver substantial economic growth, and bolster our efforts to rebuild Lagos.

“We will make tough choices where necessary and seize opportunities as needed while ensuring that no Lagosian is left behind.

“With the enormous challenges of the outgoing year, we are conscious of the fact that in order to efficiently and successfully implement the 2021 Budget, we must be selfless and dedicated.

“We are up to the task. With our collective resilience, we will achieve our key goals in all sectors, and nothing will stop us from justifying the trust of the people in this government.”

Sanwo-Olu also called on all stakeholders and residents of Lagos, the organised private sector, artisans as well as small and medium sized business owners not to relent in supporting the government by voluntarily discharging their civic responsibilities.

He said that the growth and prosperity people sought could only be collectively achieved, adding, “On our part, we will ensure that the resources entrusted in our care are efficiently and prudently managed. We will be non-discriminatory in the distribution of resources.

“This is a budget for all Lagosians, irrespective of their social, economic, ethnic, or religious background.

“I thank the Honorable Speaker of the Lagos State House of Assembly, Rt. Hon. Mudashiru Obasa, and the members of the state House of Assembly for the thorough and expeditious consideration of the 2021 Appropriation Bill, which resulted in the passage of the budget before the end of the year.

He said, “Thank you for collaborating with the Executive to satisfy the yearnings of the electorate.”

The Speaker of the House of Assembly said that the budget was people-oriented and would move the state to the next level.

Obasa, represented by Mr Rotimi Olowo, Chairman, House Committee on Finance, commended the governor for the good works he had been doing in the state.

The state Commissioner for Economic Planning and Budget, Mr Sam Egube, said that the event was as a result of significant engagements over the year.

He added, “We will drive this budget through self-performing mechanisms.”