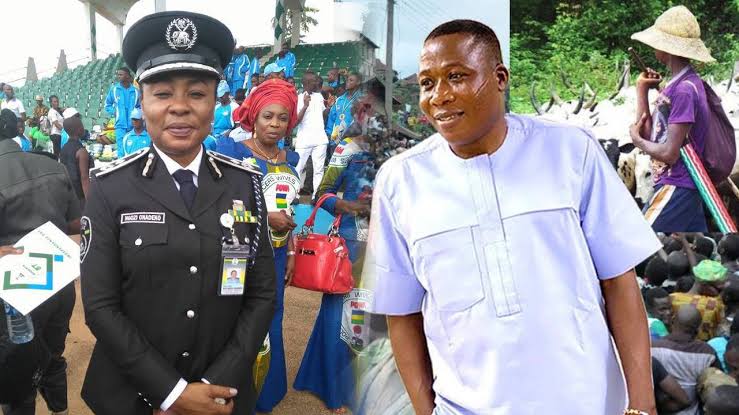 Two Fulani leaders, the Seriki Fulani of Igbo Ora, Alhaji Idris Abubakar, and the Seriki Fulani of Eruwa, Alhaji Sule Mohammed, have on behalf of Fulanis asked for forgiveness from those offended by the criminal elements among herdsmen, adding that they are ready to facilitate a peaceful coexistence in Ibarapaland.

This was just as Sunday Igboho, the Yoruba activist who gave Fulani herdsmen quit notice in Igangan, in Ibarapa Local Governemnt Area of Oyo State, re-emerged on Sunday to address another rally in the town.

Igboho, who was still dorning the same French suit he wore on Friday, when he first addressed the people, came to report back on his meeting with the new Police Commissioner in Oyo State and the Area Commander.

The activist, who disclosed that he met with the Oyo State Police Commissioner, Ngozi Onadeko and her deputy and he was not arrested, despite the order of the Oyo State governor, Seyi Makinde and the Inspector General of Police, IGP, Mohammed Adamu, told the people that he had gotten assurances from the police on the security of the area.

He therefor appealed to the people for their cooperation with the Police Area Commander and other policemen.

He assured the people that henceforth, more policemen would be drafted to the area to maintain law and order.

He also reported that the state Police Commissioner would be visiting the town and other towns to re-assure the people that there will no longer be kidnapping or killings by Fulani herdsmen.

And true to his report, the Oyo CP, Ms Onadeko visited the area, in company of the Special Adviser to Governor Makinde on Security, Fatai Owoseni, a former Police Commissioner of Lagos State.

A statement by the Chief Press Secretary, CPS, to Governor Makinde, Taiwo Adisa, the delegation toured the trouble spots of Ibarapa and Oke-Ogun areas of the state.

On-the-spot assessment of the troubled communities of Igangan, Tede and Ago Aare was conducted.

Also in the entourage were senior police officers, including Deputy Commissioners of Police, DCPs, and Mobile Police Commanders.

Ms Onadeko sued for peace, even as she declared the police’s readiness to embark on a thorough investigation of the crisis to ensure justice for victims of kidnapping, armed robbery, rape and other crimes.

He told the people to be vigilant and ensure they identify criminal elements among them for prosecution by the Police, insisting that no one should take laws into his hands.

The former CP also debunked the insinuations that Governor Makinde has abandoned the people to their fate, revealing that no fewer than 51 suspected perpetrators of kidnapping, rape and banditry are currently in police net from Oke Ogun axis.

Assuring of government’s determination to ensure that justice prevails in the cases involving the arrested lot, Owoseni however, added that the people must remain vigilant.

He counselled the residents of the visited communities, “If you see something, say something.”

Places visited by the delegation included the razed home of the Seriki Fulani in Igangan, where in assessment of the extent of damage was carried out, with a promise that thorough investigation would be conducted and perpetrators brought to justice.

Speaking at Igangan, the Secretary of Igangan Development Advocates, IDA, Lawal Akeem, said that the people were tired of the antics of the Seriki Fulani of Igangan, Alhaji Saliu Abdukadir, who he accused of complicity in different criminal cases.

Akeem added that the community has been forced to pay over N50 million in ransom for different cases of kidnapping, just as he also accused Fulani herders of regular vandalisation of farms and raping women of the community.

Also speaking, another youth in the town, Taiwo Adeagbo, added that no fewer than 15 women have been raped in recent weeks.

A member of the Oyo State House of Assembly, Hon. Peter Ojedokun, also informed the delegation that Ibarapaland had been peaceful all the while but that the peace was shattered in recent times, when Fulani herders started attacking members of the community in their farms, kidnapping persons and committing sundry crimes.

Corroborating the alleged criminal culpability of the Seriki, the Caretaker Chairman of Ibarapa North-West Local Council Development Area, Hon. Samuel Olusegun Okediji, said that the Seriki has been fingered in the series of security challenges in the area many times.

Addressing the gathering of traditional rulers, government officials and Fulani leaders in Igangan, the CP, Onadeko, said, “We have come to assess and listen to you over the incident that happened. I want to appeal to everyone of us to be calm and ensure there is peace. If there is no peace in the community, there won’t be growth and development.

“I want to appeal to the youth. We have listened and they have interpreted all your complaints and I want to say you should not spoil your case by using force. We are a new team. Bring out all the cases you have, put them in an orderly manner and we will make sure that justice is done.

“So, I want to enjoin all of you to be peaceful and live with one another in a peaceful manner. If we live in peace in this community, we should be able to identify kidnappers, robbers, and rapists. It does not matter where you come from – whether you are from Igbo, Yoruba or Hausa. Actually, we have the good and bad ones. Criminality is not only ascribed to a particular ethnic group, it cuts across all the ethnic groups.

“So, if we don’t come together with one voice, how are we going to fish out all these people?

“Please, be calm. Cooperate with the Police, law enforcement agencies and we will make this place secure for everyone, irrespective of where you come from.

“I want to assure you that all the cases you brought up will be , a thoroughly investigated and you will see that justice will be delivered.

“We will be having more of this interactive session and consultative gathering so that we will be able to sit down, talk and iron things out together without resorting to violence, which does not pay.

“Please, don’t take laws into your hands. Just tell us. Let us have peace and everything, by the grace of God, will be okay for all of us.”