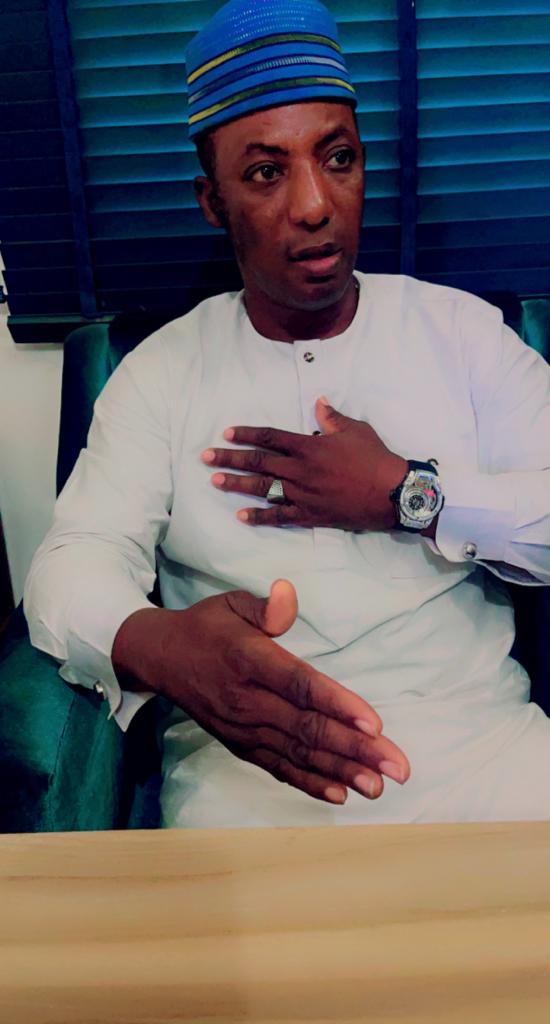 Renowned rights activist and public commentator, Comrade Razaq Olokoba, takes a critical look at President Muhammadu Buhari’s performance in his seven years in office and gives him a pass mark.
The youthful social analyst, who is also the Convener and National President of a pro-democracy group, Campaign for Dignity in Governance, CDG, at a mini-press conference in Lagos on Thursday said that despite all the various challenges confronting the country, President Buhari is able to scale through and achieve a lot for the country, asserting that no other person could have surpassed him going by the hindrances plaguing the country.
Olokoba however suggests that the President should blow his own trumpet for all the doubting Thomas to know he has done well, saying this is time to make some notices and not time to keep quiet. Excerpts:

What is your assessment of President Muhammadu Buhari in the last seven years?
Thank you very much. Well, we have experienced a lot of challenges. We have identified a lot of challenges and we are still being confronted with a lot of challenges right now. However, be that as it may, we cannot close our eyes to what President Muhammadu Buhari has been able to do in the last seven years or thereabout. At the beginning of his administration, some of us noticed that President Buhari was full of energy and patriotism. And from the picture of what we have seen in him, we have realised that he is a leader that is committed to the pursuit of our collective happiness.
We however warned about the structure he inherited. We said the structure is lopsided and thus causing hindrances to the development, progress and moving forward of the country.

What structure are you talking about, please, if we may ask?
The structures I am talking about here include lopsided polity, weak institutions and the likes. The structures I am talking about include not giving required power to other component parts and layers of governments, like the states and the local governments. We have identified those things from time immemorial; we are not just saying it for the first time. And so, if President Buhari has been able to go this far with the suspect structure, I think he should be commended.
In fact, the best anybody could do with the faulty political structure in operation is what Buhari has done. Anybody, with this political structure on ground today, would not have been able to do more than what Buhari has achieved. No matter how committed you are, the structure would drag you back, and pin you on a spot, whereby you would not be able to move forward. That is the impediment that has affected Buhari’s performance in the last seven years or so.
For me, I commend him for what he has done so far since 2015, when he ascended the presidential throne of Nigeria. Against that background I think by now he should be looking at what his exit from power would look like.

With the security challenges all over the place, are you optimistic that 2023 election would hold as scheduled?
Yes. I am optimistic.
There is no country in the world that doesn’t have security challenges. Everything must go simultaneously. As we are fighting corruption, we are combatting insecurity and health challenges. As we are combating COVID-19, we are combatting economic depression. So many problems and we must not allow any one of the challenges to shut the country down. You must not allow the economic challenges, which is a universal phenomenon, to shut down your country as you should not also allow COVID-19, which is more serious health challenge universally. And even during COVID-19, countries conducted elections.
So, if that is the case, with the security challenges, we still need to find a way around it to make sure we conduct the election in 2023. And I am highly convinced that the country’s security agencies – the Army, the Navy, the Air Force, the Police, the Civil Defence Corps, the Custom, the immigration and all other paramilitary outfits have the capacity and capability to keep this country as one up to the time we are going to conduct the elections and beyond.
So, I am convinced beyond any reasonable doubt that there will be elections next year and for people who are saying there will be no election, let us tell them that with or without them, there will be an election. We must be prepared for the 2023 election, because the PVCs in our hands are our weapons to move the country forward together. The only power you have for the desired drastic change of your choice depends on the way and manner you use the voter’s card in your procession.
You can choose from the many presidential candidates whose pictures would appear on the ballot papers. And nobody, I repeat, nobody can convince me that none of them is capable of effecting the change anybody might have been yearning for.
If not Bola Ahmed Tinubu, it could be Sowore or Atiku. If not Atiku, it could be Obi, Adebayo or Kwankwaso. One of them must fit the picture of what you want your country to be. It is the time the President should create an uprising against insecurity. And you can only do that by raising the consciousness in the faith and belief in commitment of the people to your nation. With that, terrorism can be defeated, banditry can be defeated. Kidnapping can be defeated. All the challenges in the country can be surmounted. It is the President that has the key to the ignition. He has to spark it alive and the vehicle of victory would keep rolling.
Take Ukraine President for example. Despite the bombardment from Russia, he would appear on TV as if nothing is happening to his country. He would appear as if just coming from a disco dance floor. If he addresses the media, it would be as if his country is not at war! It is in order for countries to have such challenges, which are not anybody’s creation.

What role is expected from your constituency, the civil society organizations, CSOs, to play towards the election?
Part of it is what we have done now with this interview. Our own role as CSOs is to give force to support institutions that are correct in whatever they are doing. If the masses are the ones that are trying to make the present better than the past, we are going to support that cause. And if it is the government or any of its agencies that are on the right path, it is our duty to create an awareness to recognise that and give support. What we are saying is an advocacy that we are known for. Civil societies give advocacy. Criticise, then offer proposal. Point out errors and offer solutions. Tell the people in government what they have done well and commend them. That is how to do it. So, this is our role. We must keep telling Nigerians that we do not have any other country besides Nigeria. And I am telling anybody reading this interview that, for his own good, Nigeria better be united. Nigeria better be safe and secured. Nigeria better be prosperous. History has taught us that any humanitarian crisis that is beyond minimal demand by the nation would be rejected. Ukraine knew before the war that they are part of Europe. But it got to a point recently that Poland started rejecting people from trooping into their country, because they have had enough. Germany also said similar thing until the world begins to find solution to the problem.
Nigeria is moving towards similar scenario. If anything happens, which country is going to harbour 250 million people from Nigeria?! No country would do it. The whole of Africa would not do that. No country in the whole world would attempt it. Russia has the biggest land in the world, it would not try it. For countries that keep preaching peace, they have seen the picture. They have assumed and imagined what their countries would be if anything should happen to them. That is why I am saying that anything that would make Nigeria work is the path we should be towing. We should not keep escalating the problem of the country to the point where the bubble would burst.
That is why I have been emphasizing that if we have experimented a policy for so long and it is not working, why must we continue to tow that line again and always?! And that is why the next President coming in should realise that as he is emerging and coming in as the new President of Nigeria, God spares our life, he or she must have it at the back of his or her mind that, there is the need to look into our institutions in Nigeria. Nigeria’s institutions are weak and something must be done about them.
Why people plot against the government is because of weak institutions. And that is bound to happen when we have weak institutions. With weak institutions, plotting against the government is always the order of the day all over the world. It is the strong institutions that make people have confidence in their leaders.