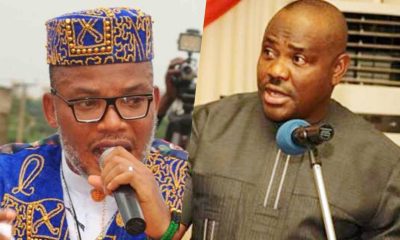 “I will lead a war against them (Nigeria) like Ojukwu. Am not joking, I know am on air, and I am warning them now. Any attempt to rob us the way they rob our brother (GEJ), the battle will start from Rivers State. We will remain opposition state like Lagos. In fact, we from the South-South and South-East will remain in PDP. We leave the South-West and North to run APC. That is how they tactically shared the country. And we will not allow them use our resources to develop their states…I want all South-South and South-East to remember this, that we’ve two Judases.”

The incendiary proclamation above came from no other Nigerian than Nyesom Wike, the current governor of Rivers State. The period was shortly after the 2015 presidential elections.

The objective fact is that Ezenwo Nyesom Wike was a ringleader among the political kingpins, who exploited the defeat of President Goodluck Jonathan in 2015 to spew the current Biafran crisis into existence. Even Nnamdi Kanu, the leader of Indigenous People of Biafra, IPOB, acknowledged at the time that Jonathan’s electoral misfortune fueled the current clamour for secession.

Upon becoming the governor, Wike became a whited sepulcher. He would hobnob with the Biafran vision in the dark, only to present a holier-than-thou image of one Nigeria in the open. Believing that the people are gullible, he orchestrated series of gestures to assuage Northern Nigeria.

The appetizer was to evoke the emotions of the Biafran war by renaming the Liberation Stadium Port-Harcourt after Yakubu Gowon. According to the governor, the gesture was for Gowon’s role in the creation of Rivers State over half a century ago, a wartime scheme then designed to decimate Chukwuemeka Odumegwu Ojukwu, the very man Wike swore to emulate in his “war against them (Nigeria).”

Serving as buffet was the deployment of a pipeline of political appeasement from Port-Harcourt to Sokoto, the seat of the Caliphate, chanting one Nigeria, with oil largesse to boot. This is how Wike became the turbo engine of the presidential ambition of Sokoto State governor, Aminu Waziri Tambuwal, who, luckily, is a crafty character, sufficiently shrewd to detect a phoney from afar. And the stage has been set.

What followed was a string of visits to Rivers State by the Sultan, performing rounds of ceremonies for laying foundation and commissioning of state projects. Worried that the chicanery was becoming clear, and to equally pacify the South-West that he had roundly castigated in 2015, Wike saw a moderating pawn in the influential Ooni of Ife, Adeyeye Enitan Ogunwusi.

The camouflage was the hasty hosting of the General Assembly of the National Council of Traditional Rulers of Nigeria at Port-Harcourt. This is the occasion Wike declared that “The Sultan and Ooni are my fathers”, ostensibly to curry favor with the North and West, as the kings from his native East moped and gaped in utter amazement.

The oddity is apparent, but no one can fault royal fathers, who honor underhand invitations perfectly packaged as entreaties for peace and unity of the country. Sultan Abubakar III was even kind to seize one of the occasions to enjoin the Muslim community in Rivers State to pledge their full support to the labile governor, his pre-election provocations notwithstanding.

But the apple, they say, does not fall far from its tree. It did not take long before Wike relapsed into his militant ways, including all manners of separatist innuendoes. At one point, he declared other religions, besides Christianity, as non grata in his state. The governor would go on to demolish a Muslim mosque, which eventually fetched him a resounding rebuke from the Sultan. Something had to give.

Ezenwo Nyesom Wike is a bombastic bozo, quite alright, but the man can still remember the parable of the tortoise and hot water. He was able to recognize that his overbearing transgressions, most of which were targeted against Northern Nigeria, might have dug him deeper. The governor needed a broader escape route.

Enter the #EndSARS protest, a nationwide movement against police brutality in Nigeria. Though the protest was timely, it unleashed serious economic havoc on the country, with massive looting and destruction of both private and public properties. And many innocent lives were lost. A coterie of highly placed politicians, who were fingered for turning the peaceful protest into a bloodbath, also needed an escape route. They quickly zeroed in on the Igbo, the whipping boy of Nigerian politics, exploiting the IPOB and the teetering bluster of its cavalier leader, Nnamdi Kanu.

Governor Wike finally found the scapegoat and wasted no time to attempt an escape. He believed, and understandably so, that any nuanced opposition to Biafran activism, or even mere anti-Igbo antics would firm forgiveness from the North. There and then Wike mounted a montage of propaganda, peeling himself from his Igbo roots of “South-South and South-East,” that he had employed to win elections.

He followed by peddling the #EndSARS protest in Rivers State as a potential beginning of another round of Biafran war. The result was a chilling campaign of extrajudicial killings in Obigbo, a small native Igbo settlement in River State, with the governor claiming to be rooting out the IPOB, the very group he helped to nurture.

But Wike will soon find out the hard way: There is no way for the wazzock. The Northern Nigerians are no fools. And neither the South-West! The day of reckoning is around the corner, come 2023! As the governor would say in time of his need, “I want all South-South and South-East to remember this, that we’ve two Judases.” And the more dangerous Judas, for sure, is Ezenwo Nyesom Wike himself. Mgbọ!