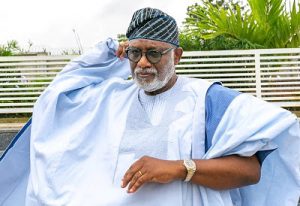 The Ondo State governor, Arakunrin Oluwarotimi Odunayo Akeredolu, is an unusual player on the nation’s political turf. The governor is known for his candour and courage. He has always exhibited these virtues. He says what he means and means what he says.

As a politician, he doesn’t run with the hare and hunt with the hound. His position on any critical issue is always known.

Few months after its idea was muted, the Western Nigeria Security Network codenamed Operation Amotekun was launched. The security initiative is a collective response of the South-West governors to the increasing insecurity in the region.

Shortly after the inauguration of Operation Amotekun, a seemingly fierce storm raged against it. It was declared illegal and unconstitutional by the Minister of Justice and Attorney-General of the Federation, Abubakar Malami. But in his frank and courageous manner, Governor Akeredolu vehemently defended the security outfit.

Trust mischief makers! They misinterpreted the governor’s strong commitment to Amotekun to be drawing a battle line between himself and the Federal Government. Their insinuation was that his stance on Amotekun would make his re-election a tall order. But Arakunrin Akeredolu pointedly told them that the security of lives and properties was greater in value than his reelection. He elevated the safety of his people above his ambition to rule the state beyond February 23, 2021.

Time has now proved that the initial furore over Amotekun was a mere storm in a teacup. The security initiative has become a pleasant reality. All grey issues around it have been resolved. Fears have been allayed. And the cloud of misunderstanding ominously hanging over it has cleared.

There are other mischievous people who wrongly impute Amotekun to the governorship politics of Ondo state. They mistake the strong support of Governor Akeredolu for the security outfit for an attempt to take advantage of it for his reelection.

Arakunrin Akeredolu is known for his passion for the welfare of his people. Therefore, his support for Amotekun is a function of an altruistic intention. It does not stem from any desire to remain in the Alagbaka Government House beyond 2021.

It is never in doubt that the numerous remarkable achievements of his government in the last three years are capable of ensuring his re-election.

Amotekun is not the first test of Arakunrin Akeredolu’s honesty and courage. One remarkable test came ahead of the 2016 gubernatorial election in the state. As the standard bearer of the All Progressives Congress, APC, he had taken his campaign train to Oda town. Oda is a community in Akure South Local Government Area of the state. The road from Akure, the state capital, to the community was deplorable and plying it was nightmarish.

Among the conditions of the community for voting for Arakunrin Akeredolu was a promise that he would construct the 8.0 kilometres road if he eventually became governor. He promised to look into their demands. But the regent of Oda, Abike Akosile, wanted a commitment from him.

She brought out a piece of paper and demanded that the then APC candidate sign an agreement with the community that he would construct the road. But he declined. There were those who felt Arakunrin Akeredolu should have signed the agreement even if he knew he would not fulfill the pledge. Their thinking was that his refusal could jeopardize his chances of winning the poll.

About three years after the incident, Arakunrin Akeredolu awarded the contract for the construction of the road. It is one of the on-going projects in the state. While flagging off the project, he told the regent why he refused to sign the agreement when he was seeking votes from the community. He said he didn’t know what he would meet if he became governor. What if he signed the agreement out of desperation and later, his government could not afford to construct the road?

He knew his heart was pure and his quest to serve the state was noble. Today, everybody in the state knows that the governor will never make a promise he will not fulfill and will fulfill any promise he makes. And this has earned him the Mr-talk-and-do soubriquet.

It takes moral courage for a politician to be honest, given the fact that deception is an efficacious weapon of politics. Honesty is considered a virtue. But it seems disadvantageous most of the time.

There have been many who fell victim to their candour. This is one thing about this ethical distinction that the ancient Greek philosopher, Plato, lamented when he submitted that “Honesty is for the most part less profitable than dishonesty.”

Also in the words of the Roman Catholic nun and missionary, Mother Teresa, “Honesty and frankness make you vulnerable.”

In Nigeria, politicians are not expected to call a spade a spade. They must call it by another name if they are desirous of winning electoral contests. You are not a good politician in this clime if you don’t know how to deploy deceit, deception and lies to have your way.