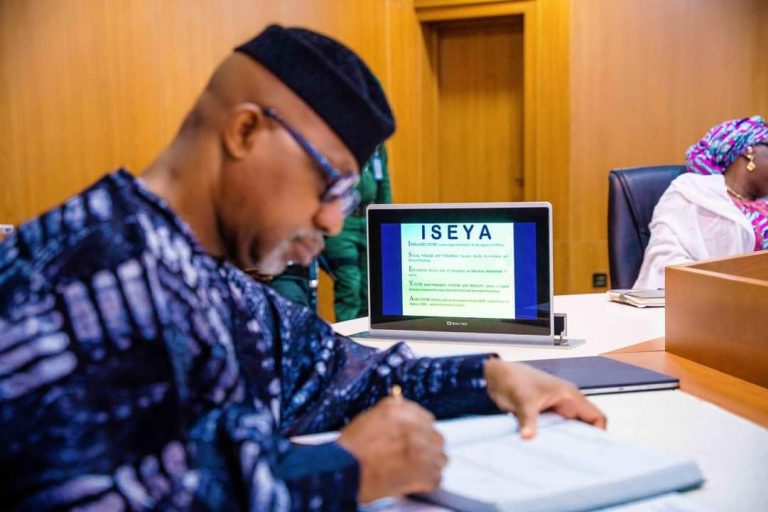 The famous remarks made by Asiwaju Bola Tinubu, former governor of Lagos State, who is also currently the presidential candidate of the ruling All Progressives Congress, APC, in Abeokuta, few days to the party’s presidential primary, prompted this writer to put his search light on the personage of Prince Dapo Abiodun, the governor of Ogun State and why he always remain unruffled in the face of ceaseless provocations.

In the fiery speech that has since gone viral and variously described as the ‘Abeokuta Declaration’, Tinubu referred to the governor as ‘Eleyi’, which literally means, (even you, could not have been elected into office without my support). Not everyone saw it as a compliment, but it was implicit from the tone, that the APC National Leader was talking out of annoyance. Of course most people expected the governor, who now seems to relish being called ‘The Eleyi of Ogun State’, to react combatively. None of these happened!

The governor behaved like who he really was; a prince and an ‘Omoluabi’ (a true born). He took it in his stride and even came out, a few days later, to express support for the ambition of Asiwaju. A close aide to the governor later told me, when I asked to find out why he responded the way he did, that the governor sees Tinubu as his father.

“Prince Abiodun apparently did not see anything wrong in a father chastising his son in the open. He had always seen Asiwaju as a leader and a father. That was why he told all of us not to say anything against Asiwaju nor respond in any way that is degrading to his person,” the aide said.

Or have we forgotten the smile that was on the face of the governor on June 14, when Governor Kayode Fayemi introduced him as ‘The Eleyi of Ogun State’ at a mega rally in Ekiti State. The introduction was indeed met with loud cheers from the crowd. The meme has become part of our political lexicon!

Perhaps, we should flash back our minds to what took place in Ogun State before the 2019 governorship election, when Abiodun, the then APC candidate was vilified and harassed by supporters of the immediate past governor of the state. At least, we all saw what happened at the mega rally when supporters of Abiodun and other APC candidates who identified with him, were intimidated and openly assaulted in the presence of President Muhammadu Buhari and other party leaders.

The prince, characteristically kept his calm, campaigned assiduously and went on to win the election. He has in the past three years been silently doing the job which he was elected to do; he has been studiously changing the infrastructural landscape of the state; the governor and his team have touched every part of the state without over blowing it and he has judiciously managed the resources of the state.

This intervention is therefore, an attempt to unravel the reason behind this self-effacing personality. Yes, he may, by his nature and from afar look like a quiet fellow, but when one gets closer, the picture of a top class performer suffices; the picture of someone who understands the challenges of governance and what it takes to preside over a complicated state like Ogun.

Hence, when an opportunity came up for this reporter to visit the state last week, one had little choice than to give it a positive consideration. Particularly, since it presents a chance to see first-hand what the governor has been doing and why the state has been peaceful and progressive under Governor Abiodun. This is not however a piece to praise the businessman-turned-politician, but to do a critical scrutiny of what the Ogun governor has done in his more than three years in the saddle.

The visit took us to various parts of the state and we were able to see ongoing projects, many of which are completed, with few ones about to be completed. Some of the ongoing major projects in the Ogun East Senatorial district include Gateway Agro Cargo Airport at Ilisan, road networks and housing estates. The proposed Cargo Airport which was initiated ten years ago by the Gbenga Daniels’ administration is almost 80 percent completed, according to the Commissioner for Works and Infrastructure, Eng Ade Akinsanya.

The commissioner also said that the government has worked on major roads in all the three senatorial districts, including the much talked about 14-kilometer Ijebu-Ode-Epe road; Sagamu-Siun-Abeokuta road and the Atan-Lusada-Agbara-Marogbo Toll road linking Lagos, which is ongoing. Akinsanya, an American-trained unassuming engineer, took his time to explain the impact each of the projects will have on the people. He said the icing on the cake of the Cargo Airport is the economic deals with African Development Bank, AfDB, to site an agro testing firm at Sagamu, adding that most of the agricultural products in Nigeria lack certification, which has made their exportation to other countries difficult. Also, there is Molusi road in Ijebu-Igbo, housing projects in Abeokuta and an imposing Gateway City Gate, a tourist site at the Sagamu interchange, amongst other projects.

For a governor who has faced criticisms, particularly from residents living around neighbouring towns to Lagos in Ogun West, due to bad access roads, Abiodun readily replied that he understands and shares in their pains. He said he came prepared because he sought the job and that even though the challenges the state is facing are daunting, they are not insurmountable. While admitting that successive governments neglected some parts of the state, he said his administration has begun to tackle the bad roads in the state. He promised to provide palliative work to fix the craters on major roads in Akute, Alagbole. Olambe and Sango-Ota; while also working on permanent construction that will solve the problem once and for all.

Of course, you have to wonder where the money is coming from, in this era of paucity of funds, when the global economic meltdown is affecting every corner of the globe. It’s all about managing available resources for maximum effects. Needless to also mention, according to Eng Akinsanya, that the Abiodun administration inherited the debt of N202 billion from the Amosun administration on roads alone. Akinsanya also said, when pushed to explain why the last government was so fixated on demolition and constructing bridges given the resources involved, “Our road design and construction is such that we try to avoid demolition. It is actually not necessary to demolish while constructing roads, unless it is unavoidable. The same thing applies to bridge construction. Most of the bridges constructed by that regime were a waste of resources.”

Beyond the above, however, is a bigger picture of a state in progress. A drive around the major towns and cities showed that construction works are going on and there is a deliberate effort on the part of the Abiodun government to improve the welfare of the people. Apart from this, one critical area in which the government has not been fully appreciated is in the area of security. We drove across the state for hours without a security escort and there was no panic or alarm. This cannot be replicated in many states in the country.

As it is, there is no doubt that Prince Abiodun is secretly, without making unnecessary noise, doing a good job. Apart from his gentle mien and businessman’s approach to governance, he also has the right team who are providing the necessary support and assistance in helping the captain to steer the ship in the right direction. One can only wish him well and hopefully, the electorate will give him another term to complete what he began.

•Aruna, is the Publisher of ‘The Pledge,’ an online news platform.