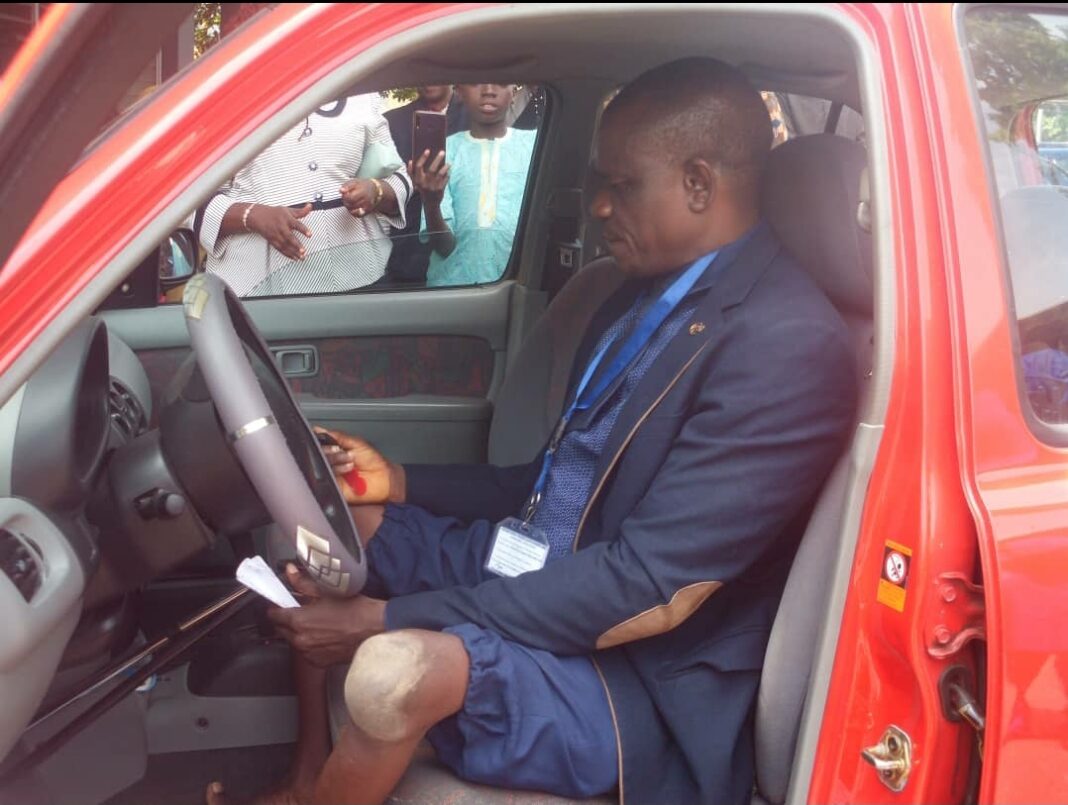 The Oyo State government has donated an automatic-geared car to a physically-challenged local government worker, who is an acting Director, Education and Social Services, to ease his movement and encourage others in his condition of government’s readiness to support people with special needs.

The beneficiary, Mr Dauda Adeagbo, who is crippled, works with Ifeloju Local Council Development Area, LCDA, Ogbooro, in Oke-Ogun area of the state.

Presenting the vehicle, which is specially made for Adeagbo’s physical challenge on behalf of the state governor, Engr Seyi Makinde on Monday, the Commissioner for Local Government and Chieftaincy Matters, Chief Bayo Lawal, said the event was in continuation of the delivery of succor to the people with special needs in the state, as promised by Governor Makinde during his electioneering campaign.

Lawal stressed that the governor has been a philanthropist before he came into power, adding that the exercise would be replicated in all the local government areas and LCDAs across the state.

Lawal said, “Aside regular payment of salaries, prompt promotion and access to other allowances, workers should be awarded and encouraged, so that they will do their civil duties optimally and effectively. I want to assure the people of the state that the Makinde administration is ready to encourage workers across the state to aid their better performance.

He added, “Mr. Atanda, the acting Director of Education and Social Services has been dedicated to his work and his dedication, not minding his physical challenge, drew the attention of government to him; which is why he is been celebrated today. We urge other civil servants in the state to be dedicated, dutiful and loyal, as their reward is around the corner.”

Speaking earlier, the acting Head of Local Government Administration, HLGA, Ifeloju Local Council Development Area, Ogbooro, Surveyor Abosede Adebimpe, said Mr. Adeagbo’s dedication to work, despite his condition, attracted the attention of the Commissioner for Local Government and Chieftaincy Matters, Chief Lawal and his entourage of the Local Government Audit Committee, headed by Senator Mosurat Sunmonu, when they visited the council earlier in the year.

He said his situation prompted the commissioner to direct the council administration to request for vehicle for him, based on his physical challenge, stressing that the move was successful due to the Governor Makinde’s passion for the welfare of civil servants.

In his acceptance remarks, Adeagbo said he will never forget the day in his life, as many administrations have promised and failed to help on his condition before the present administration in the state led by Engr. Makinde made it a reality.

Adeagbo to be more dedicated and dutiful at work and be forever appreciative to the incumbent administration.