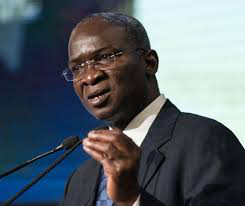 …Thanks God For PMB

Popular human rights advocate and pro-democracy activist, Comrade Razaq Kolade Olokoba, has described former governor of Lagos State and the incumbent Minister of Works and Housing, Mr Babatunde Raji Fashola, SAN, as a blessing of God to Nigeria and to humanity, insisting that God Almighty deserves praises for President Muhammadu Buhari, who was so lucky to have a special personality like Fashola in his administration.

Olokoba made this remarks at a small gathering with a couple of friends on Wednesday, at a joint in Ilorin, the Kwara State capital, where he extolled the virtues of the minister, who he severally referred to as workaholic, brilliant, agile and focused, enthusing that “this smart Senior Advocate of Nigeria, SAN, would one day have a date with destiny where Nigerians would praise God the more for the day he was born.”

Speaking further, the youth leader and convener of several civil society organizations, CSOs, expressed the conviction that God has a bigger responsibility for the former governor of Lagos State in the nearest future, after his present position, asserting that, Fashola’s antecedent has shown that he is always moving from a stage to higher stages.

Going down memory lane, Olokoba recalled that Fashola started his political activities, so to say, as the Chief of Staff, CoS, to the then Governor Bola Ahmed Tinubu, till 2007 before he later succeeded his boss as governor, adding that it was his superlative performance as governor between 2007 and 2015 that earned him his current position, where he is still excelling.

According to him, going by the narrated scenario, Fashola will later or sooner find himself in another higher radar, because it appears God has destined him to keep serving humanity from lower to higher pedestal, adding that Fashola puts nobody in doubt that he always feels good and comfortable working for his country and humanity.

Against this backdrop, Olokoba, therefore, urged Nigerians at home and in the diaspora to double their support for the born achiever for the benefit of the generality of the citizenry, observing that “while others in political offices are being distracted by their search for other lucre, even before the end of what they are presently enjoying, Fashola still buries himself in office doing what his boss, President Buhari assigned him to do!”

The right activist and pro-democracy advocate then disclosed to his small gathering that organizing a huge appreciation rally for Fashola towards the end of his duty next year could not be a bad idea, confirming that an earth-shaking rally to appreciate him as a divine gift from God to humanity is in the pipeline.

The CDG Convener also seized the opportunity of the informal parley to urge the minister to keep fixing his eyes on the ball, because the good people of Nigeria are appreciative of his efforts at seeing a better Nigeria, assuring him of the support of members of his over 70 different CSOs under his umbrella.

No Petition On Financial, Economic Crimes In C/River -EFCC