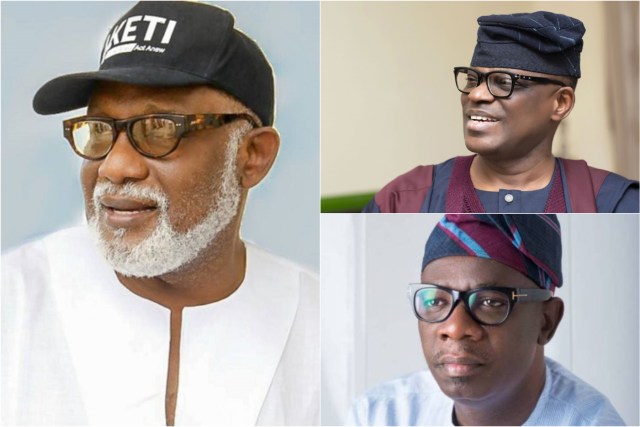 AYODELE ESAN looks at the race for Alagbaka Government House five days to the Info State governorship election and concludes that it is a tight three-horse race between the incumbent Governor Oluwaroti Akeredolu of the All Progressives Congress, APC; incumbent Deputy Governor Agboola Ajayi of the Zenith Labour Party, ZLP and Eyitayo Jegede of the Peoples Democratic Party, PDP.

As the October 10, 2020 Ondo State gubernatorial election approaches, the rain of violence and mudslinging are also edging high.

These are the signs that none of the contestants is sure of what will happen on the D-day. It also brings to the notice of Nigerians the fact that the race may be a tight one between the incumbent governor and the candidate of the All Progressives Congress, APC, Rotimi Akeredolu; his deputy and candidate of the Zenith Labour Party, Agboola Ajayi; and the Peoples Democratic Party, PDP candidate, Eyitayo Jegede.

The Independent National Electoral Commission, INEC, has said that 17 political parties and candidates are to participate in the election. The candidates are made up of one female and 16 males. But political analysts and watchers of political events in Ondo State believe that the October 10, 2020 governorship election is going to be a three horse race, mainly between the APC, PDP and the Zenith Labour candidates. They see other candidates as just making up the numbers.

Analysts believe that if the three districts decide to vote their sons, then there may be a very close election. In that sense, watchers of political events believe it is possible for an inconclusive election to play out on first ballot.

Speaking on the election, a public affairs analyst, Jide Ojo, said it was a three horse race and that Jegede and Ajayi might give the incumbent Governor Akeredolu a run for his money. He even goes further to say that in case each zone votes their son, then Ajayi with the support of former Governor Olusegun Mimiko may garner votes from the Central, especially Ondo East and Ondo West.

But a lecturer at the Baze University, Abuja and and also a public affairs analyst, Ismaila Bello, believes that Akeredolu will win the election because, according to him, he has done a lot of work in the last three and half years.

Bello said, “I am predicting that Governor Akeredolu will win the election. Even in 2016, when he didn’t have any achievements to showcase, he won. It is surer for him now.”

With few days to the election and given the fact that 24 hours is a very long time in politics, no one can accurately predict a winner now. The candidates are still in the field reaching out to the electorate and this still affords them the opportunity of boosting their chances.

The PDP candidate, Jegede, is a familiar foe of Akeredolu, having contested with him in the 2016 election. Though Jegede lost the election then, many believe the role played by business mogul, Jimoh Ibrahim, gave Jegede only two days to campaign for the election.

Leaders of the three main parties have, however, made Ondo State their primary home as jostling for the people’s votes become more intense.

Series of meetings are holding side by side, with the main aim of getting two of the parties to collaborate against either the APC or the PDP.

The profile of the three major candidates are intimidating. Interestingly, the three of them are lawyers, while both Jegede and Akeredolu are Senior Advocates of Nigeria.

He was at Aquinas College Akure from January 5, 1973 to July 1978 for his secondary education. He had his Higher School Certificate education at Christ’s School, Ado Ekiti.

In 1984, Jegede qualified as a lawyer after the one-year mandatory programme at the Nigeria Law School, Victoria Island, Lagos.
He worked in the law firm of Murtala Aminu & Co., Yola. After 12 years of practice in the law firm, six years of which he was the Head of Chambers, he established his own law firm, Tayo Jegede & Co in 1996. He was heading his law firm of Tayo Jegede & Co in Abuja and Yola before he took his previous appointment as the Chief Law Officer in Ondo State as the Honourable Attorney-General and Commissioner for Justice.

Jegede is a former Chancellor of Anglican Communion of Jalingo, Taraba State and was also once the Chancellor of Anglican Dioceses of Yola and a member of the Implementation Committee of the American University, Yola, Adamawa State. He is also a member, Board of Governors, ABTI Academy International School and member, Board of Trustees, Elizade University, Ilara-Mokin, Ondo-State.

On November 23, 2016, the Appeal Court pronounced Eyitayo Jegede as the gubernatorial flag-bearer of his party, the PDP, a position previously assumed by business mogul, Ibrahim.

Jegede once again emerged the flag-bearer of the PDP for the October 10, 2020 governorship election in Ondo State with a poll of 888 votes. He defeated the incumbent Deputy Governor, Agboola Ajayi, who emerged the first runner-up with 657 votes.

Agboola Ajayi
Alfred Agboola Ajayi was born on September 24, 1968. He serves as the Deputy Governor of Ondo State and was elected into office on November 26, 2016 as the running mate of Governor Akeredolu under the APC platform.

On June 21, 2020, Ajayi resigned from the ruling party, APC, and defected to the opposition PDP, citing irreconcilable differences between him and the governor, and adding that the APC “has become a poisoned space.”

He hails from Kiribo town of Western Apoi tribe in the Ese Odo Local Government Area of Ondo State. He studied Law at Igbinedion University, Okada, in Edo State and graduated with a 2nd Class Upper Division degree. He subsequently received his call to bar in 2010 after graduating from the Nigerian Law School in Abuja.

Ajayi started his political career under the platform of the Social Democratic Party, SDP, and became the Chairman of SDP in Old Opoi Ward 1 from 1988 to 1998. He later joined the PDP in 1998 and was made the Secretary of the PDP in Ilaje/Ese Odo Local Government Area between 1998 and 1999. He was later made the Supervisor for Agriculture for Ese-Odo council from 1999 to 2001 and subsequently appointed as Supervisor for Works and Transport for Ese-Odo council from 2001 to 2003.

He then went on to become the Caretaker Chairman of Ese Odo between 2003 and 2004, before he was finally elected as the Chairman of Ese-Odo council between 2004 and 2007. He served as former member of the Federal House of Representatives and represented Ilaje/Ese Odo federal constituency, under the PDP.
During his time in the House of Representatives, Ajayi served as the Chairman, House Committee on NDDC from 2007 to 2010. He later decamped from the PDP to the APC and contested election as running mate to Akeredolu in the Ondo State governorship election in November 2016 under the platform of APC. The pair won the election and were sworn in as governor and Deputy Governor of Ondo State respectively on February 24, 2017.

Oluwarotimi Akeredolu, SAN
The incumbent governor of Ondo State, Arakunrin Rotimi Akeredolu, was born on July 21, 1956 in Owo to Reverend J. Ola Akeredolu of the Akeredolu family and Lady Evangelist Grace B. Akeredolu of Aderoyiju family of Igbotu, Ese Odo, in Ondo State.
He attended Aquinas College, Akure, Loyola College, Ibadan and Comprehensive High School, Ayetoro, for his secondary school education and Higher School Certificate, respectively. He went on to the University of Ife (now Obafemi Awolowo University) to study Law, graduating in 1977; and he was called to the Nigerian Bar 1978.

In 2012, the Nigerian Bar Association named its new secretariat in Abuja after him with its president citing the need for “generational identification and recognition of those who had contributed immensely to the development of the association.”

In 2012, he contested with the then incumbent goveenor, Olusegun Mimiko and Mr Olusola Oke of the PDP and lost.

He won the battle to re-contest for the Ondo State 2020 governorship election after beating Olusola Oke, Kekemeke, Jimi Odunayo, Segun Abraham and a few others in the APC primary election.

Oyo: Why I Dissolved My Cabinet -Gov Makinde