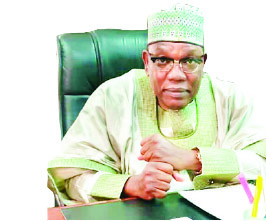 Earlier, Justice Modupe Adebiyi of the FCT High Court had scheduled the trial for Tuesday, April 28, 2020, but the April 28 date was not feasible in the light of the shutdown of courts by the Chief Justice of Nigeria, Justice Tanko Muhammad, following the lockdown in force in Abuja and many other parts of the country to curb the spread of COVID-19 pandemic.

The EFCC is prosecuting Martins, as the coordinator of the Police Equipment Fund, for allegedly conniving with three others to perpetrate the alleged fraud.

REcall that Justice Mohammed Talba, then of FCT High Court, Gudu, Abuja, now elevated to the Court of Appeal bench, had on November 24, 2009, discharged Martins and his co-defendants in his judgment on the no-case submission filed by them.

However, the anti-graft agency appealed the judgment; and the Court of Appeal, Abuja Division, on June 28, 2012, upheld the EFCC’s appeal, holding that Justice Talba erred by discharging the defendants.

The court, in its lead judgment, read by Justice Regina Nwodo ordered the Chief Judge of the FCT High Court to reassign the case to another judge for re-trial.

Not satisfied, the defendants appealed to the Supreme Court, but the apex court, in its March 23, 2018 judgment  affirmed the Court of Appeal’s verdict and ordered the re-trial of the case.

The EFCC subsequently amended and filed three count charge in Charge No: CR/267/18 at the FCT High Court. Three others charged along with Martins are: Ibrahim Dumuje, Yero Gella and Nigerstalg Limited.

One of counts filed, on behalf of the EFCC,by John Ainetor of Festus Keyamo’s Chambers reads: “That you, Kenny Martins, “M”; Ibrahim Dumuje, “M”; Yero Gella “M”, and Nigerstalg Limited on or about 18th of May, 2007 in Abuja within the jurisdiction of the High Court of the Federal Capital Territory, being entrusted with the sum of N7,740,000,000.00 (seven billion, seven hundred and forty million naira), property of the Association of Local Governments of Nigeria, and  the Federal Government, dishonestly converted to your own use the sum of N59,000,000 (Fifty nine million naira) of the said sum of N7,740,000,000.00 in violation of the agreement between you on one hand and the said Association of Local Government of Nigeria, and Federal Government of Nigeria on the other, that the entire said sum of N7,740,000,000.00 should be used to procure equipment for the Nigerian Police Force, and thereby committed an offence punishable under Section 312 of the Penal Code Act Cap. 532 Laws of the Federation of Nigeria (Abuja) 1990”.