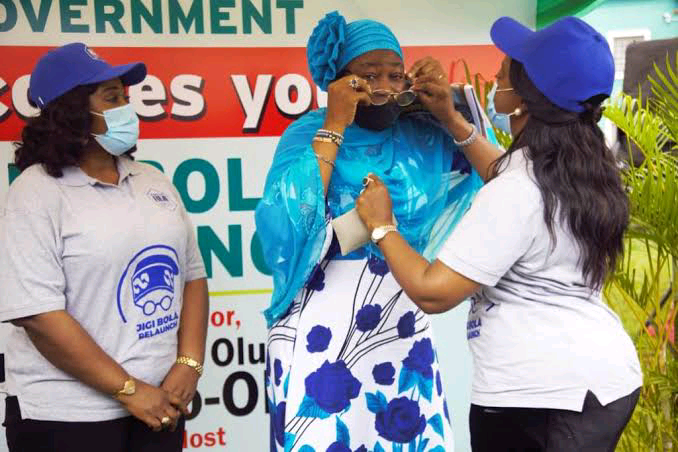 The Lagos State governor, Babajide Olusola Sanwo-Olu, has been commended for his thoughtfulness to revive ‘Jigi Bola,’ a health programme of the former governor, Asiwaju Bola Ahmed Tinubu, to cater for people with sight challenges, years after the former giverno had left office.

Giving the commendation was the leader of the Black Youth Vanguard, BYV, Comrade James Adeyemi.

‘Jigi Bola,’ which means Bola’s eye glasses, was an eye treatment scheme introduced by Asiwaju Tinubu, when was governor of Lagos State, to treat patients with eyes problem free of charge. The scheme entailed testing, treating and surgery as the case may be free of charge, nad the provision if eye glasses, also free of charge, where necessary.

What confirms that the incumbent government in the state is an offshoot of Tinubu’s administration became manifest when the sitting governor, Sanwo-Olu revived the scheme, because of its importance to the citizenry.

In the present scheme if things, Sanwo-Olu, according to reports, has expressed commitment to treat up to 250,000 people suffering from one eye problem or the other.

Saying the governor has behaved in a manner that connotes that the importance of the egg-like organs of the body can never be over emphasised, Comrade Adeyemi said that Governor Sanwo-Olu deserves accolades because of his efforts at showing the people that government is a continuous exercise, where successors continue the good works of their predecessors, adding, the people of the state are appreciative of the governor’s initiative.

The youthful youth leader therefore stressed the need for Lagos residents to reciprocate the good gestures of the governor through maximum support for him and his team, warning that any attempt to sabotage the governor would be resisted vehemently.

Reminding Governor Sanwo-Olu that that appreciation of good works is a clarion call for more hard-work, Adeyemi reminded the governor for the umpteen times that “Though the people of the state and beyond are appreciative of your outstanding performance, they would still play Oliver Twist by asking for more.”