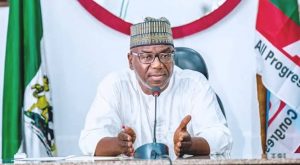 By Adeniyi Adedeji, Ilorin
The Kwara State Government has not been able to access about N7 billion Universal Basic Education Commission, UBEC, fund for school infrastructures since 2013.
This is because the state has not met its counterpart fund to UBEC since 2013.
Disclosing this while flagging off the distribution of exercise books to publc schools in Kwara State on Thursday, January, 30, Governor AbdulRahman AbdulRazaq disclosed tha failure on the part of the state to fulfil her obligation to UBEC has denied the state access to funds running to N7 billion and this has left schools in the state in deplorable condition.
Governor AbdulRazaq however disclosed at ‎the distribution exercise that the state had paid the counter-part fund to UBEC to enable it access funds from the Commision to renovate and reconstruct public schools.

Additionally, he said the state has not been able to access the UBEC fund also because the contracts awarded since 2013 have not been completed.

He said, “We are trying to meet up with the plan, because what is delaying us in that fund is that contracts that were awarded in 2013 need to be concluded and certified before we have full access to the fund.

“Hopefully, this year we will commence accessing the funds to improve our public schools.”

The governor said that with the fund, the future of education in the state was bright, adding, “We want to restore education in Kwara back to number one in Northern Nigeria.”‎

He added, “Like they say, the journey of a thousand miles start with one step, so we are starting the first step with 31 schools. All our major schools are in deplorable condition, which is nothing to write home about.

“From 2013, nothing much has been done, you only need to go to our schools; basic thing like walls, water and sanitation is not there, leaking roof all over.

“The number of students per classroom, some classrooms in Ilorin that I went to had about 100 students in the class, how can students learn in that condition?

“For the students to pick up, they have to cheat, that is why we have the WAEC issue which we are putting behind us very quickly.”

The governor, who said people were talking of free education, declared that the money to be used for free education is not what was being used to rebuild the schools from scratch.