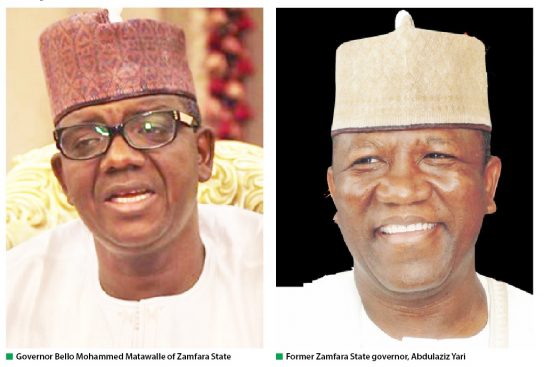 It’s already one year now that Governor Bello Matawalle was sworn in as the chief executive of Zamfara State, resulting from the seeming miscarriage of justice from the judiciary. In fact, neither the people of Zamfara State nor the entire citizens of Nigeria have ever witnessed this kind of lackadaisical mal-administration in the entire history of the state

For record emphasis, in 2011 when former governor Mahmudu Shinkafi handed over the mantle of leadership to His Excellency, Dr Abdul’aziz Yari, His first 100 days in office was full of positive recollections and tremendous achievements. He completed by pass road in Gusau, High Court building in Gusau and Shari’a Court of Appeal complex in Gusau; constructed Gusau/Kasuwar Daji road, Zamfara State Civil Service Commission complex in Gusau, access roads (tarred) in Damba Low Cost Housing Estate in Gusau, Zawiyyah School in Gusau; procured and sold large consignment of assorted fertilizers at N1,000 per bag; distributed 50 tractors on loan to farmers in the state; dualised Unguwar Dallatu road in Gusau and constructed New UBEC Secretariat complex in Gusau, the Zamfara State capital, among others.

These and many others were done in just approximately 100 days in office by former Governor Abdulaziz Yari. Any wonder, the people so much cherish that administration? Basically, human capital development and developmental achievements were the hallmark of the Yari administration.

In 2019, despite Matawalle not receiving the blessings of the electorate to captain the state’s ship and whether the voyage is sailing smoothly or not is the subject of discussion, then how far, so far? What changes or conquests brought ye home Matawalle? Is this government under Matawalle worth its salt or like the headline screams, celebrating Matawalle’s one year of failure or have the bad and the ugly outweighed the good? Is Matawalle a progressive or retrogressive governor? Why is Zamfara classified as the Center of Poverty under Matawalle? How poor are Zamfarans? Where are the billions of naira loans and funds secured by Matawalle meant for Zamfara projects in the last one year? How corrupt is the Matawalle administration? And last but not the least, how has this government fared in education, health, transportation, road, water, electricity and other basic necessities with emphasis on welfare of the people?

In the last one year that Matawalle has been ruling Zamfara State, he has turned the state upside down, giving Zamfara the Bermuda triangle tag; which everybody has heard of it but no one wants to be there. His illogical style of leadership has given rise to all forms of banditry and unlike few years ago when Zamfara became a hot spot on newspaper headlines for the good reason of a project commissioned under Yari, Matawalle’s one year administration has been full of hell to the people of Zamfara and their neighbours. Corruption is a daily affair. Banditry has doubled; while cattle rustling has turned to a money making quick business. Kidnapping has been rampant and killing and wiping an entire community out is the order of the day. There are suspicions about the involvement of some government officials in the Zamfara pogrom under Matawalle, despite the Peace Initiatives with bandits, but the stealing and killing of humans and their cattle never stopped. While these nefarious activities are ongoing, Matawalle never sought an end, but decided to fund these criminals with millions of naira in the name of reaching peace agreement with them.

To begin with, what are the people of Zamfara celebrating in the last one year under Matawalle, FAILURE?
Between June and August 2019, N2 billion was withdrawn from the account of the Ministry of Finance in the name of constructing a new Government House, a project majority of people in Zamfara have condemned as not being a priority. But despite withdrawing funds for the project, nothing has happened.
Again, N200 million, which has now been increased to N500 million meant for security vote is not used for that purpose. Matawalle is not ready for the poor masses of Zamfara, because he met a Government House allocation of N20 million monthly, but now increased it to over N70 million monthly for God knows what.

Security
The ceaseless security challenges that has bedeviled the state under one year of Matawalle’s regime has testified that Zamfara State is no longer secure under the current administration. Matawalle is ruling Zamfara in a manner similar to the epoch of invasion and occupation of territories by fascists; unlike democracy where leadership emerges by the will of the majority. Zamfara State has in the last one year always been in the news for wrong reasons and media organisations have connived with the government to silence the voices that rise against maladministration. If democracy is truly government of the people, by the people and for the people, since the people of Zamfara State rejected Matawalle during election, returning him to the people of Zamfara can best be described as an imposition and the governor, knowing full well that he was not duly elected by the people, would not take security of lives seriously.

Education
One of the deteriorating sectors of Matawalle’s one year administration is the education sector. Education as a liberator is an incontestable fact. Any investment in education is therefore not just money well spent, but it is a catalyst for advancement in society. It is common knowledge in Zamfara State that the Yari administration had made sure that no child was denied access to quality education. It is a common factor that primary education has always been the foundation upon which the entire education structure rests on or is built. Governor Yari’s silent revolution in education convinced the people of Zamara State that he is for real. He took  far-reaching measures to rescue the educational system from an impending collapse and decay of the past. The colossal amount of financial resources committed has led to the drastic upliftment of the standard of primary education across the state, underscoring the slogan of ‘catch them young’. His predecessors failed to improve access to basic education in Zamfara State, but Governor Yari surpassed them by bringing about unprecedented transformation that the sector witnessed.
At the inception of the Yari regime, primary schools were in deplorable condition. The challenge was enormous, but Yari remained undaunted. There were dilapidated structures, dearth of qualified manpower and problem of ghost workers, no furniture, no course to quality and standard. Yari, an achiever, managed to rebuild Zamfara on education and achieved that perfectly. Unfortunately, today, one year into the mal-administration of Matawalle, he has completely abandoned that sector and education has returned to the dark days in Zamfara.
Specifically, the education sector under Yari took a good shape in just one year. More than 300 new blocks of classrooms were constructed and commissioned in the first year alone. A 7,000 capacity teachers’ training centre was built in Gusau, fully equipped with ICT facilities to prepare teachers for the latest demand in the teaching profession. N1.7 billion was released as counterpart funding to the state Universal Basic Education Board. In tune with this, 1,300 teachers underwent retraining to ensure all children in the state receive quality education.
Over 400 schools were rehabilitated in different parts of the state with new sets of furniture, books for the libraries; 4,000 classrooms were constructed across the state for primary learning.

One other good thing in the sector was the renovation of Arabic schools to encourage parents who prefer to send their children to faith-based schools to have options.

The Yari administration exhibited admirable trait of making a difference in the Northern region by paying a lot of attention and resources to girl-child education. He renovated three Girls Secondary Schools in Gusau and Talata Marafa Local Government Area. Under the Yari administration, more girls than boys were in primary schools (public and private) in eight out of the 14 local government areas in Zamfara State. Also, numbers of girls who enrolled in school and completed their education increased in just one year into his first tenure.
Statistics have shown that Zamfara had the highest enrollment figure for girls in primary and secondary schools in the North-west, and third highest in North-West and North-East combined, courtesy of Abdul’aziz Yari. The state also doubled as the only state in the North-West and North-East to have more girls than boys in secondary school in his first year in office. The number of girls who enrolled in school and completed their education up to WAEC also increased by 60 per cent. This steady and enviable rise was by no means accidental and anyone who followed Yari administration closely in its first year can testify to this fact.

Health
Talking about the health sector under Matawalle is like talking about hell. Everything there is completely in a shambles. The Yari government touched on the health sector of the state with child immunisation as the focus of its campaign. Huge finances were devoted to ensuring that adequate and affordable health care services were provided for the people of the state. These concerted efforts have seen a drive down in the infant mortality rates in the state. Yari procured malaria drugs worth millions as part of his commitment to improve healthcare delivery in the state. He built hundreds of PHCs across the 14 local governments of Zamfara and equipped them in just one year. Several modern hospitals were also build all over the state including the famous Yariman Bakura Specialist Hospital. Incidentally, the accidental governor Bello Matawalle is unable to build even a single primary health care in the entire Zamfara state for good one year. It’s indeed a big slap!

Road
The Matawalle administration is yet to build a single 0.5 kilometre or 1 kilometre road since inception a year ago in any part of the state, despite securing billions of naira loans for road construction in the 14 local government areas from their accounts.
It is a common fact that, the Yari administration has played a significant role in road construction, semi urban water supply scheme, youth empowerment and agriculture, among others, within his first year of running the affairs of the state. It is also on record that Yari spent billions of naira on resurfacing and reconstruction of two federal roads, namely, Gummi-Anka-Daki takwas and Gusau-Kaura Namoda-Zurmi-Jibiya roads.
Zamfara has 14 local government areas, namely, Anka, Bungudu, Bakura, Bukkuyum, Birnin Magaji, Gummi, Gusau, Maru, Maradun, Talata-Mafara, Tsafe, and Zurmi, who benefited from 25 kilometer township roads, each, by the state government within the first year. Beside all these roads, Governor Yari had also constructed over 1,500 kilometre roads at rural areas across the state to ease transportation among the grassroots teeming populace.
To mention but a few, in every sector of government, Matawalle has failed.  Celebrating Matawalle’s one year in office is nothing but celebrating Matawalle’s one year of FAILED administration. We rest our case!