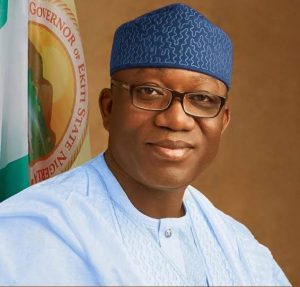 The Ekiti State government has disclosed plans to domesticate the Federal Government’s zero oil strategy for total diversification of the state economy in its drive to reposition the state’s finances.

The state Commissioner for Budget and Economic Planning, Mr Femi Ajayi, disclosed this at the presentation of the detailed analysis of the 2020 budget to stakeholders in Ado-Ekiti on Thursday, January 30.

Disclosing that the 2020 budget of N124,724,869,355.95, made up of N53,538,093.59 and N71,186,775,549.36 capital and recurrent expenditures respectively, was within the ambit of the requirements for the fiscally sustainable plan of the Federal Government, the commissioner explained that the budget was in line with fiscal policy of having a purposeful and all-inclusive budget that will serve as a tool for the implementation of socio-economic policy and prudent management of available resources.

He added that the 2020 budget preparation took into cognizance the interests of all towns, communities and interests groups, saying that the  budget was woven round the five cardinal programmes, which the administration intend to deliver to the people of the state.

He said, “The 2020 budget represents a reduction of N5,199,602,779.06 or four per cent from the 2019 budget of N129,924,472,135.01.  The operational dynamics of the 2020 budget was to reduce the budget performance variance in the 2020 fiscal year to ensure compliance with the requirement of the state fiscal transparency, accountability and sustainability programmes for results which allows only 20 per cent variance in implementation.”

Ajayi added that the reduction was also informed by the need to have a more realistic budget, considering the dwindling allocation from the federation account.

Analysing the 2019 Budget of Restoration upon which the 2020 Budget of Deliverables was hinged, the commissioner said 2019 budget was prepared to restore the core values of Ekiti people and revamp the state economy, which was designed to widen the scope of revenue generation by widening the tax net and blocking all leakages in the revenue accrued to government.

Explaining further, Ajayi said that the budget was financed principally from revenue from federal allocation, internally generated revenue, value-added tax, funds from international donor agencies, grants from the Federal Government and other sources.

He also explained that the focus of the 2020 budget was to establish a fiscal framework that would transform the socio-economic activities of the state and situate Ekiti in the right perspective in the committee of states in Nigeria.

He added that the budget was to drive Ekiti towards agricultural, industrial and knowledge base of the Nigerian economy, through completion of all ongoing capital projects across the state and commencing other legacy projects.

He highlighted the objectives of the budget to include: consolidation of the achievements recorded in core values of the state; establishing a fiscal framework that will positively translate the present economic realities to a major viable agricultural and industrial base of the Nigerian economy; pursuing aggressive revenue generation drive within the ambit of the law and reduce the dependence of the state on allocation from the Federal Government; investing in human capital and strengthen the human resources base through strategic investments in qualitative education and health care delivery to all as well as improve ease of doing business and provide enabling socio-economic environment required for the success of government reforms.

While seeking from the people their continued support for the Governor Kayode Fayemi administration to bring its lofty ideas and programmes into reality, Ajayi noted that the implementation of the budget will further improve the lives of the people and stimulate economic activities in the state.