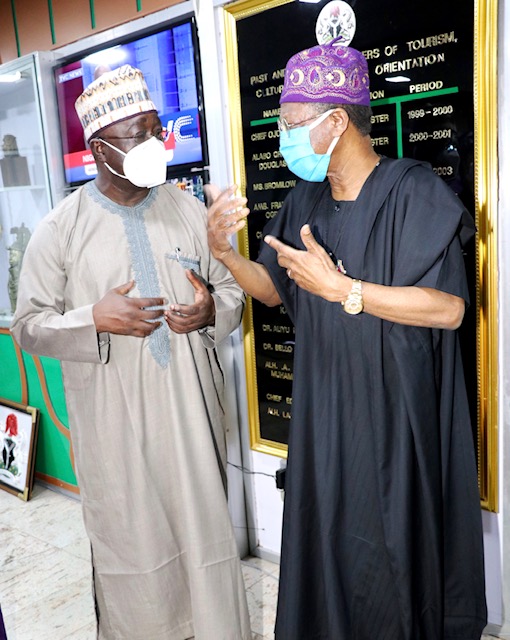 The Minister of Information and Culture, Alhaji Lai Mohammed, has stressed the need to explore the nation’s vast tourism potentials to create jobs, achieve inclusiveness and address youth restiveness.

The minister made the remarks in Abuja on Monday, when he received a delegation from Nasarawa State government, led by the Deputy Governor, Dr. Emmanuel Akabe.

The Deputy Governor said the delegation came to seek the support of the Federal Government for the development of tourism sites in the state,

Alhaji Mohammed said, “Your Excellency, I want to thank you for this visit because it shows the kind of importance Nasarawa State attaches to culture and tourism.

“But the truth of the matter is that we can avoid a lot of youth restiveness if we take advantage of tourism because tourism in its own right has the capacity to create jobs and create leisure and bring unity and understanding among the people.

“We look at tourism in Nigeria as the panacea to poverty, as one industry that can bring inclusiveness and it is targeted largely at women and the youth.”

Expressing delight at the award of contract by the Nasarawa State government to construct the road leading to the Farin Ruwa Waterfalls in the state, which is the highest waterfall in the country at 150 metres height, Alhaji Mohammed said this will complement the contract earlier awarded by the Federal Government for the construction of the Farin Ruwa Dam, for the provision of water and electricity, as well as the construction of the road leading to the dam.

“You can see that with the combined efforts of the Federal Government and the State Government, that key element, which is always missing in tourism development, which is infrastructure, has already been addressed,” the Minister said.

He welcomed the plan by the Nasarawa State government to build a Film Village at the Farin Ruwa Waterfalls, saying the scenic beauty of the environment can attract film makers across the world as well as local and international tourists.

Promising to pay an official visit to the Farin Ruwa Waterfalls, with a view to assessing the waterfalls and discussing with the state government officials on how best to develop the falls into a world-class tourist site, the Minister also used the occasion to commiserate with the government and people of Nasarawa State over the recent gruesome murder of the state APC Chairman, Mr. Philip Shekwo.

In his remarks, the Nasarawa State Deputy Governor, observed that tourism, which is a low hanging fruit for job creation, is being neglected and relegated to the background in Nigeria.

He sought the support of the Federal Ministry of Information and Culture towards exploring and exploiting the vast tourism potentials of Nasarawa State, especially the Farin Ruwa Waterfalls because of its potential to attract tourists.

The Deputy Governor was accompanied on the visit by the State Commissioner for Information, Mr. Dogo Shama; the former Commissioner for Culture and Tourism, Hajia Lantana Ahmed, and the Convener of the Annual Nasarawa Festival, Mr. A. Y. Bello, among other officials.