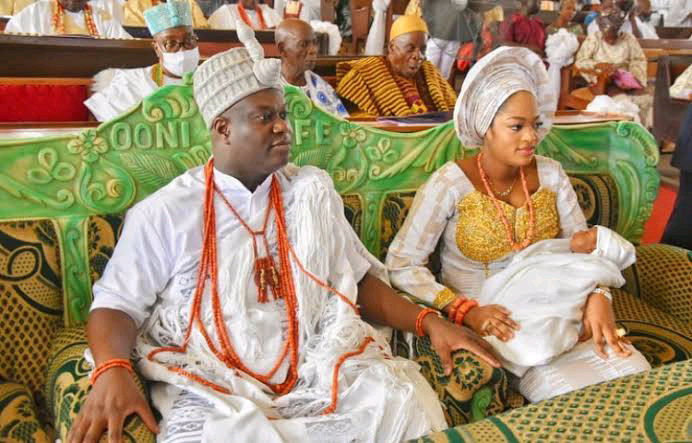 The wife of Arole Oduduwa, the Ooni of Ife, His Imperial Majesty, Oba Adeyeye Ogunwusi, Queen Silekunola Naomi Ogunwusi, has recounted why it was a rather long journey for her to conceive.

Queen Ogunwusi said that her inability to conceive on time was due to societal pressure.

Recall that the queen gave birth to a baby boy in November, 2020, two years after her marriage to the foremost Yoruba monarch.

Speaking on the ‘difficult experience’ she had prior to getting pregnant, while featuring on TVC’s ‘Your View,’ Queen Ogunwusi said that conception becomes tougher for women, when they are constantly reminded of their fertility struggle.

She said, “It was like I was supposed to start popping babies almost immediately. The whole world was just looking at me.

“Thank God for a supportive husband, he would always tell me not to bother. I think it was something I was challenged with from the first day I got married.

‘‘One thing that society does not yet know is that when a woman is under pressure, it becomes very difficult to conceive, because it messes up with her brain and then it goes into her hormones and it becomes more difficult.

“The more you abuse a woman about childbearing, the more it becomes difficult for her to conceive.”

The queen also revealed that beyond her conception struggle, she faced pressure concerning the sex of her child, though not from her husband, but the general public.

“I would say from the public, there was a little bit of pressure, but because my husband didn’t actually care about what gender, it could be a girl, a boy, or even twins, he didn’t care.”