National Compass NG
Home Discourse Why I, The Queen’s First Black Lord Lieutenant, Do Not Believe The... 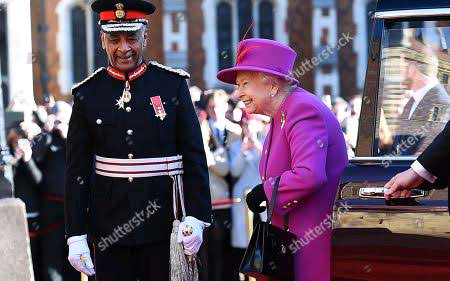 One of the most contentious claims made in Meghan Markle’s interview with Oprah Winfrey this week was that one about race.

A member of the Royal Family is alleged to have raised questions or concerns about ‘how dark’ the skin of Meghan’s child might be.

And the uproar that ensued has been deafening, with the word ‘racist’ recurring in almost every news report.

But I would ask for a moment’s pause and reflection. Before we leap to the conclusion that this was a vulgar, racist question, we should recognise that we know neither the context nor the intent behind the supposed inquiry.

I’m drawing on first-hand experience here. My wife, Julia and I were asked exactly the same question – in a spirit of benign interest – by my mother-in-law, Muriel, shortly before the first of our two daughters was born in 1980.

I should point out here that, like Meghan and Harry, I am black and Julia is white.

My late mother-in-law, excited about the arrival of her first grandchild, was getting her knitting needles out and simply wanted to know what colour baby clothes would suit the newborn’s complexion.

She asked in much the same way that any of us might wonder: will the baby have her mother’s hair or her father’s nose? Absolutely no offence was intended or taken.

The context of that conversation was a loving family, its intent to resolve the question of buying wool – which goes to show that unless you know both context and intent of what people say, you must keep an open mind.

In light of this interview, I feel desperately sad that, after our collective response to COVID shone such a warm light on the British values of community, the nation is now in grave danger of being divided by the question of racism.

In 2015, Her Majesty, The Queen appointed me as Her Lord-Lieutenant of Greater London – the first British-born non-white holder of this ancient post.

In that capacity I support the Queen and the Royal Family, helping them to build bridges, to connect people and organisations and enhance Londoners’ sense of belonging to an inclusive capital.

As a result, I have had the privilege of meeting all of the members of the Royal Family on many occasions – and I can confirm that they are charming and inclusive.

That is not just my perception – it is one shared by the many thousands of people, whom I have seen react to the special ‘pixie dust,’ which a royal visitor sprinkles over those they meet.

As head of the nation, the sovereign acts as a focus for national identity, unity and pride; she gives a sense of stability and continuity.

Her close links with, and affection for, the Commonwealth remind us of her affiliation to all her subjects, no matter what their colour or creed.

I was born in 1951, in a two-up, two-down in the poorest area of Nottingham, raised by my single white mother, after my father – a Nigerian law student – returned to his native Lagos.

We had an outside loo and a tin bath, I had free school meals at my state school, but my mother instilled in me those British values of self-belief and hard work and I was fortunate to win a scholarship to Fitzwilliam College, Cambridge University.

What a shock! I remember thinking, as I sat down to my first candlelit banquet in a venerable wood-panelled room, that there was more silverware at my place setting than we had in our entire cutlery drawer at home. Alien though it was, I always felt welcomed by fellow students and dons alike.

Of course, growing up, I did encounter racism and prejudice. Remember this was the post-Windrush era, when lodging houses barred their doors to ‘blacks and Irish.’

My first girlfriend’s father was appalled that she was dating a black man and forbade her from seeing me, although he had never even met me! – an injunction we blithely ignored.

So, in my lifetime, our attitudes to race have come a long way, and this is encapsulated for me in two images from last year.

Consider first Patrick Hutchinson, the British Black Lives Matter protester who, during clashes with a far-right white activist, saved a man from being beaten by a mob of angry black youths, before handing him safely over to the police.

The image of Mr Hutchinson, carrying his would-be assailant to safety abides, a spectacular demonstration of hope for a future in which humanity supersedes racial divisions.

Another powerful image of our time comes from Her Majesty’s commemoration of the Centenary of the Tomb of the Unknown Warrior in Westminster Abbey.

Because of lockdown, the Queen was accompanied only by her Equerry.

The photo shows her standing in silent contemplation as Major Nana Kofi Twumasi-Ankrah, who was born in Ghana, knelt to lay a wreath beside the tomb. Duty and inclusion exemplified in sacred surroundings.

We have made progress since the day that my father arrived from Lagos.

But I am the first to concede that, although our direction of travel has been so positive, we have a long way to go. And, as Black Lives Matter reminded us, we need to pick up speed.

To do that, we need to learn to talk about racism – real and perceived. For example, I believe many white business leaders in the UK do nothing to further the cause of racial diversity for the very reason that they are afraid to discuss it, in case they inadvertently cause offence.

That is why we must always concentrate on the context and intention of people’s comments before we judge them.

We should not feel afraid to address matters of race and skin colour – even if we make blunders – as long as our objective is benign.

I think back to a military dinner I attended as Lord-Lieutenant, when my co-host told me he had ‘quite recently’ come to the conclusion that Enoch Powell’s Rivers Of Blood speech was wrong!

I could have reacted in two ways: either been deeply hurt that he had ever believed it contained a truth, or accepted it as a – somewhat clumsy – attempt to make me feel welcome at a gathering where I was the only person of colour.

I chose to do the latter. I did not take offence. And this, I believe, is the way forward.

In the course of my career as a businessman and philanthropist, I have learned not to be affronted by well-meant errors wherever they occur.

Actually, when I was in Nigeria for a business meeting recently, I was amused when a hotel check-out clerk – who did not raise her head from her keyboard – said, ‘You can’t be called Olisa. That’s a Nigerian name and you’re a white Englishman.’

In my years of working closely with the Royal Family, I have never once encountered the slightest hint of racism. I assured her, however, that my father was Nigerian and then asked her about her own name – Blessing – on her badge. ‘Aha!’ I said, ‘Blessing is an English name, but you’re obviously Nigerian. Don’t you have a Nigerian name?’

‘Yes,’ she said, ‘it’s Ngozi.’ ‘And what is that in English,’ I asked, feeling pleased with myself. ‘Blessing,’ she replied.

We had both fallen into the trap of making glib assumptions. But were either of us being racist? No. Of course not.

And I don’t have to go to Africa to discover this truth. Before lockdown, Julia and I were on holiday and encountered a chap handing out leaflets at an ecclesiastical building. He seemed mildly incredulous when my wife told him that I was Lord-Lieutenant of London.

‘Oh, which borough?’ he asked; the unspoken sub-text being that I – a black man – could not hold a particularly elevated title.

So when Julia explained that my role encompassed all the boroughs he seemed embarrassed.

Later, as we were leaving, he rushed over to tell me: ‘Sir, I’ve read all about you in the Court Circular.’ He seemed to think an apology was necessary. But really I didn’t mind one whit.

His error was a benevolent one. He was kind and civilised. And I still believe that, by and large, our nation is, too. Certainly, we take our lead from our monarch – and indeed all the Royal Family – who remain a shining example of probity, inclusivity and decency.

In my years of working closely with them, I have never once encountered the slightest hint of racism. Indeed, in all they do, they strive to repair rifts, not create them.

I do hope that when we contemplate recent events, we will remind ourselves of what is wonderful about our nation, recognise the strength of our collective values, acknowledge how far we have come, and then press the accelerator pedal to speed up the process of celebrating our talents.

•Sir Olisa is the Lord-Lieutenant for Greater London, and High Bailiff and Searcher of the Sanctuary of Westminster Abbey.