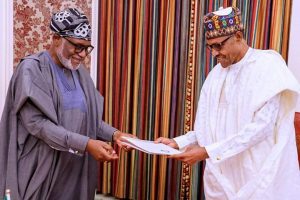 The Ondo State governor, Arakunrin Oluwarotimi Odunayo Akeredolu, SAN, on Tuesday, February 4, said the formation of the South-West security outfit codenamed ‘Ooeration Amotekun’ was not for his re-election bid.

Akeredolu, who is also the chairman of the South-West Governors’ Forum, said, “Ondo State has already done enough in terms of security and I do not really need Amotekun to be reelected for a second term as governor.”

A statement by his Senior Special Assistant on Media and Publicity, Ojo Oyewamide, said that Akeredolu disclosed this while on a visit to President Muhammadu Buhari at the Presidential Villa.

Akeredolu told State House Correspondents that he came to formally invite the President to commission the Ore flyover which is among several projects to be commissioned to mark the third anniversary of his administration.

The governor said, “Ondo civil servants are the happiest in the country, because their salaries are paid promptly and we have commenced the payment of the new minimum wage.”

Meanwhile, Akeredolu has urged the Federal Government to legalise the use of marijuana solely for the production of CBD drugs in the country.

The governor said CBD can be extracted from marijuana and is a potent drug in the treatment of cancer.

He further expressed concern that Nigeria still spends huge amount of money on importation of the drug when it can be produced locally.