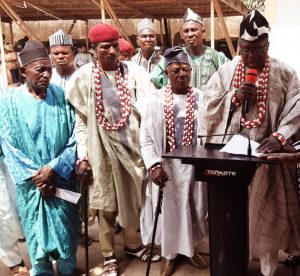 The Tiv Traditional Rulers’ Council of Taraba State has called for honest dialogue in ending the protracted Jukun/Tiv crisis in the state.

Chairman of the Tiv Traditional Rulers Council of Taraba State, Chief David Gbaa, Ter Bali II, made the call in Jalingo, at a reception in honour of the Clerk of the Taraba State House of Assembly, Mr. Orngu Mellah.

Condemning the recurring crisis, which it said had claimed lives and valuable property, the Tiv Traditional Council called on civil society groups, the government, the Church and other neutral bodies to voluntarily provide an unbiased platform for dialogue to seek an end to the lingering feud between the two ethnic groups.

Recall that the Jukun and the Tiv, the two major ethnic groups in Southern Taraba had been at each other’s jugular for more two decades.

Gbaa said, “This is not the best of times for us as a people, but in every situation God instructed us through the Bible to give thanks and look up to Him.

“I therefore, urge all Tiv people in Taraba State and beyond to return to God in prayers. What we need today is peace and unity of purpose for development and inclusive growth for our collective good.

“I therefore, on behalf of the Tiv Traditional Rulers’ Council once again condemn the needless crisis in Southern Taraba and called for restraint by the Jukun and the Tiv for the peace and development of Taraba. 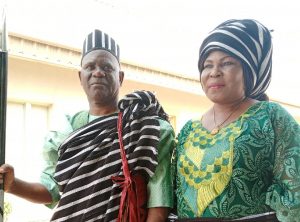 “We want to call on the government, the Church, reputable civil society groups and the Taraba State Traditional Council among others to voluntarily provide an unbiased platform for dialogue where both parties will come to negotiation with open mind to end the needless feud.”

The Ter Bali II, Gbaa, also congratulated the Clerk of the Taraba State House Assembly, Mr Orgu Mellah, on his successful climbing of the ladder of leadership in the state House of Assembly and enjoined him to continue to serve humanity and the society with the fear of God.

A former Speaker of the Taraba State House of Assembly and the member representing Takum @ state constituency, Hon. Mark Useni, described Mellah as a humble technocrat, whose honesty and commitment to work was unprecedented.

In his remarks, Mr. Mellah thanked the Tiv Traditional Rulers’ Council for the honour done him and called on them to continue to encourage other Tiv sons and daughters with such honour, which he said would spur them to do more.

President General of Tiv Cultural and Social Association, Chief. Goodman Dahida, called on the state government to fast track the return of all displaced people to their homes.

He commended the efforts of the state government in ending the crisis, but noted that it is only when people were allowed to return to their homes that permanent peace would reign, adding that the state was losing a lot in the crisis which had taken a toll on the agriculture and social sectors of the state.

Also speaking, Mr Dennis Nev, a former Permanent Secretary, Taraba State Government House Administration, called on the Tiv people of Taraba State to work for the development of the state.

Nev also called on other tribes in the state to accept the fact that Tiv are indigenous to Taraba State with equal rights, privileges and responsibilities as everybody else.